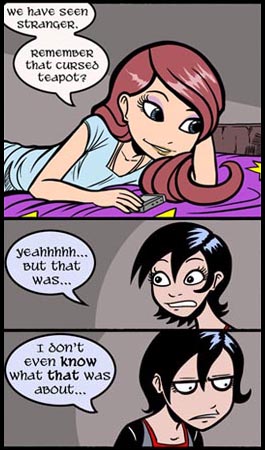 We don't know what it was about, either.
Calvin: All I can say is, this year Santa had better bring me everything on my list! I've been extremely good all year.
Hobbes: What about the noodle incident?
Calvin: No one can prove I did that!
— Calvin and Hobbes (the Trope Namer)
Advertisement:

The Noodle Incident is something from the past that is referred to but never explained, with the implication that it's just too ludicrous for words—or perhaps too offensive for depiction—and the reality that any explanation would fall short of audience expectations. Questions about it are often met with "You Don't Want To Know…" Persisting is a good way to press a character's Berserk Button.

Commonly introduced to the audience by having characters react to some fantastic and improbable event with "Oh no, not again." The key to this trope is that the audience is left to imagine what happened based on vague hints or clues, with funny (or scary) (or both) results.

Named for an incident referenced by the characters of Calvin and Hobbes, where the author admitted he decided against ever stating what happened, as he figured nothing he could come up with would be as outrageous as what the readers thought happened.note It originated from the Sept. 14, 1990 strip,

in which the word "incident" was not used, but was used all the time after that, starting with the December 12, 1990

Don't be surprised if it was caused by a trickster-type character. If there's a noodle incident and a trickster happens to be in the main cast, the trickster is almost always responsible for it, or at least blamed for it.

Almost always a case of Nothing Is Funnier, particularly if it has an outlandish name, such as the Trope Namer. Compare Cryptic Background Reference for snippets of deeper lore that are not fully explained, usually to aid in worldbuilding. See also Another Story for Another Time, Ambiguous Criminal History, In-Joke, Jackhammered Conversation, Relax-o-Vision, Noodle Implements, Second-Hand Storytelling, Take Our Word for It, That Mysterious Thing, and What Did I Do Last Night?. Comedy counterpart to Nothing Is Scarier, where the imagined horror is more effective than what could be explained. Reminiscing about a Noodle Incident by the people involved can result in Lost in Transmission for an outsider. Compare and contrast Offscreen Moment of Awesome, where the off-screen incident would have been better on-screen. See also Cow Tools. Enough such incidents create a character who has Seen It All. If a Noodle Incident is essential to solving a mystery, it's a Riddle for the Ages. If it results in the person/people involved being banished from wherever it happened, they've become Persona Non Grata. And if, many episodes or installments later, we finally get to see the incident and all the details about it (at least one TV series season, book volume or film sequel has to be in the gap), the ensuing new episode/installment becomes the Resolved Noodle Incident. See also Great Offscreen War. Contrast Oblivious Mockery, where characters talk about an event they don't know happened but the viewer does (most of the time).

In Spy Fiction or similar stories with two longtime allies, the Noodle Incident is usually referred to by a place's name. "This is just like Budapest!" "Remember Helsinki?" "God, it's Rio de Janeiro all over again." Sometimes this is elaborated upon, but usually not.

To be clear, this isn't simply a reference to something that is never shown "on-screen". A Noodle Incident is marked by a lack of information, shown or told. Bob saying to Alice, "Remember that time we robbed a bank?" does not qualify, whereas "Remember the bank?" does.

Naturally, this trope is a good source of Fanfic Fuel. Sometimes overlaps with Getting Crap Past the Radar. Contrast with Remember When You Blew Up a Sun?, which is where the reminiscence is anything but ambiguous.

Not to Be Confused with The Google Incident (or the second one), although you might get this vibe from some tropers.

Peter mentions to Chris about an incident at Sea World involving a whale's blowhole and why he isn't allowed back there.

Peter mentions to Chris about an incident at Sea World involving a whale's blowhole and why he isn't allowed back there.