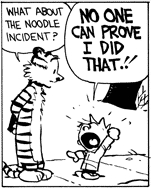 WHAT THE BALLS IS THE NOODLE INCIDENT?! I HAVE TO KNOW!
Advertisement: