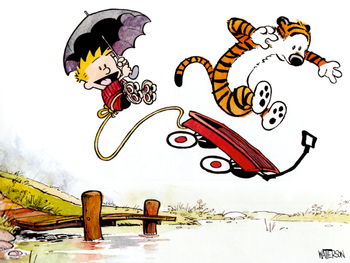 The essential, authoritative, and indispensable voices of a generation, Ladies and Germs!
Calvin: I don't want to pay any dues in life. I want to be a one-in-a-million, overnight success! I want the world handed to me on a silver platter!
Hobbes: Good luck. (walks away while rolling his eyes)
Calvin: (yelling after Hobbes) SURELY YOU CONCEDE I DESERVE IT!
— March 13, 1992

What happens when you take the unpredictable panel layouts and surreal nature of George Herriman's Krazy Kat and Winsor McCay's Little Nemo, add the childhood fantasy elements of Crockett Johnson's Barnaby and Fujiko Fujio's Doraemon, throw in the lush art, adventure, distinct characterizations and biting satire of Walt Kelly's Pogo and the gently comedic look at the hard truths of life from Charles M. Schulz's Peanuts, include a dash of classic cartoon slapstick, and fuse them all together into one comic?

You get one of the most (maybe the most) beloved Newspaper Comics of all time, that influenced, changed and thrilled an entire generation, all drawn and written by one man — Bill Watterson. It came at a time when the comics medium needed it the most; almost everyone before Watterson attempted to copy the success of Peanuts by imitating the deceptively simple style and focusing on the funny animals like Snoopy that would bring in the money. Unfortunately, comic creators missed the mark on the aspects of Schulz's strip that actually should have been followed, mainly the philosophical themes and the down-to-earthiness. As a result, comics once again became gag-a-day strips rather than an artistic medium, and there was a shift from children characters to teenagers and adults.

Watterson reminded us that newspaper comics don't have to be bland, crude drawings, funny animals can have deeper personalities and insights in life, and that it was still possible for a strip to successfully explore philosophical themes without feeling tacked on. And yes, comics about children can still be great. It was so successful that even Charles M. Schulz gave his approval in a foreword to one of the book collections.

Calvin is a precocious 6-year-old who lives in a slightly different, more exciting reality than everybody around him, full of alien visitors, dinosaurs, and parental cooking so awful that occasionally it tries to eat him. Hobbes is his best friend; to Calvin, he's a walking, talking tiger, to everyone else he's only an inanimate plush toy.

As if Calvin's life wasn't exciting enough, he also often imagines himself to be someone more glamorous, like sci-fi adventurer Spaceman Spiff, world-weary private eye Tracer Bullet, Super Hero Stupendous Man, or a Tyrannosaurus rex. Calvin's non-dinosaur-and-alien-related moments are often much more philosophical than a six-year-old generally appears, and Watterson directly acknowledges this in several anthologies and interviews. To Watterson, Calvin is a tool to subtly mock the modern age in its myriad forms — Calvin creates snowmen that resemble pretentious postmodern art sculptures, rails against the modern world's hyper-commercialized state while indulging in it like the worst six-year-old, and occasionally questions the justification for humanity's continuing existence while gazing at a piece of trash carelessly discarded in the woods. At the same time, Calvin perfectly portrays the realistic child genius- one moment casually articulating concepts he won't cover in vocabulary tests until high school, the next throwing a temper tantrum because they're out of his favorite cereal.

One of the most important (or perhaps that should be least important) parts of the strip is that the reality of Hobbes' dual nature and the many adventures and misadventures he and Calvin share is frequently left ambiguous. Watterson has described the matter as being a non-question: This is not a strip about a young Reality Warper going on magical adventures with a stuffed animal that comes to life when no one else is looking, nor is it as simple as a boy with a stuffed tiger and an overactive imagination. This is a strip about the world seen through Calvin's eyes. To Calvin, Hobbes is a real tiger, a cardboard box is a cloning device, a wagon driven off a ramp can fly to Mars, and mutant snowmen can stage a rebellion against their creator. And that is all that matters.

The strip was known for being fun to look at, due to Watterson's sheer artistic skill; for its ability to tell stories without dialogue; and for its varied and creative Sunday Strip layout. This in itself was a major controversy, as Watterson requested a fixed amount of square footage for his Sundays (as opposed to funny-page standards, which requires the cartoonist to fit the story into six or eight pre-sized panels that can be cut apart, reassembled or discarded as each individual newspaper sees fit.) Watterson argued that, since comic strips are a visual medium, it would be in everyone's best interests for him to have complete visual control over his work, regardless of resulting upheavals in comics-page layouts. He won, and similar fixed-layout concessions have gone out to comics such as FoxTrot and Over the Hedge in following years.

Watterson consistently refused to license his characters for products or media other than the various compilations of the strip and even had a brutal fight with his syndicate over it. Though he won, this led to a booming market in unofficial merchandise, one of the more ubiquitous being window stickers of Calvin urinating on the logos of various American car manufacturers. At one point in time he considered an animated TV series featuring the characters, expressing a fondness for the medium, though this never came to fruition.note One of the main reasons being that by giving the characters voices, Watterson felt he would be robbing long-time readers of what the characters sounded like to them. Moreover, Watterson felt that by animating the series, he would have to sacrifice the satisfaction of the cartoon being created solely by him. This was part of the reason for his obstinate refusal to license; to him, approving someone else's work is not the same as doing it yourself.

Calvin and Hobbes ran from November 18, 1985 to December 31, 1995, at which point Watterson retired for fear of the strip going stale. No new material has been released since then and Watterson, who changed careers from cartooning to oil painting, has become a notorious media recluse in the intervening years. In early 2011, he mailed an oil painting of a character from Cul de Sac to his syndicate as a donation for the Team Cul de Sac Parkinson's Research charity. This was the first piece of new art his syndicate had received from him in 16 years. Two years later, he produced a poster for the film Stripped, a documentary on the history of newspaper comics. A year after that, he collaborated with Stephen Pastis for three Pearls Before Swine strips (Pastis called this the cartoonist equivalent of getting "a glimpse of Bigfoot", and would later pay tribute to the iconic final strip of Calvin and Hobbes in the strip the day after Watterson's contributions). In a 2015 interview, he pointed out that he's not really "reclusive", but when you're trying to keep complete strangers from digging up your phone number and calling you, you have to build walls and maintain them.

A documentary on the comic, called Dear Mr. Watterson

, was released on Nov 13, 2013. It features interviews with cartoonists such as Bill Amend, Stephan Pastis, and Berkeley Breathed. It explores the impact of Calvin and Hobbes. The normally reclusive Watterson does a lengthy interview in the 2015 book Exploring Calvin and Hobbes. He also did an audio interview for the comic strip documentary Stripped

In a surprising 2021 crossover, Hobbes has appeared canonically in Bloom County, as Opus and Oliver help him find a now-adult Calvin

, who fully embraced his Spaceman Spiff fantasy and made it a reality