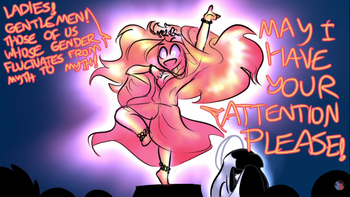 Possibly coined by Milton Berle, this is a variation on the respectful greeting "Ladies and Gentlemen" with which a speaker or performer traditionally addresses their audience from the stage. Usually takes one of the following forms:

Although the phrase is often purely Played for Laughs, it also sees more genuine use when the greeter wishes to acknowledge any non-binary gender dynamic.

Generally not used as an insult against X — but compare gender-based versions of My Friends... and Zoidberg.