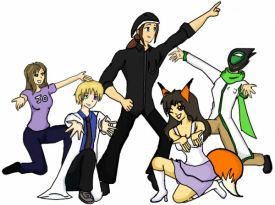 L - R: JesuOtaku, Arkada, Professor Otaku, Vixen, and Malakye.
'We love all fans except one. (If you have to guess who, it's probably you.)'
— banner tagline
Advertisement:

The Desu Des Brigade, abbreviated to the D2Brigade, or incorrectly as the DUD Brigade, was a team of reviewers with the following members:

While each of the reviewers has his or her own individual video review series, they also collaborate on other productions together. This began with the "Desu Rattle" podcast, when Professor Otaku brought Arkada, JesuOtaku and Vixen together to create a weekly podcast about anime. They became known as the DesuDes Brigade when they created their personal website. Malakye helped in the creation of the site, so he became the fifth Brigade member. Their reviews are aimed at discerning anime viewers who want to find out anime worth watching.

As of April 20, 2012, the D2 Brigade has disbanded, although all on good terms. Prof and Arkada still make content, but Vixen and Jesu have since retired from video making and taken all their content down to avoid future employers discovering it. Vixen previously ran a Tumblr blog dedicated to keeping the site's memory alive, but has since been closed down.

JesuOtaku and Arkada now have their own pages.