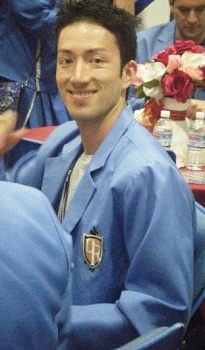 Before you ask, he actually is wearing an Ouran uniform.
"Permission to describe Todd Haberkorn here, Sergeant?"

"Sir, yes sir! Hope you like this! Get ready!"
Advertisement:

One of Funimation's voice actor stars with a distinct and recognizable voice, Todd Michael Haberkorn's (born August 16, 1982 in Arlington, Texas) current claims to fame are Allen Walker, Death the Kid, Ling Yao, Natsu Dragneel, and North Italy. He was also the host of "FUNimation Update". Though not pigeonholed yet, he's played some Bishōnen with berserk buttons, and tends to be a shoe-in for being cast as bizarre, eccentric, shady, and insane characters. In fact, many people consider his casting as Watanuki from ×××HOLiC to be virtually "written for him"! Can ad-lib incomprehensible, random scared noises like nobody's business, in the same vein as John DiMaggio. These days, he is starting to become quite similar to Vic Mignogna, having formed a friendship/video rivalry with said actor, started up his own fan team on Facebook, his presence is growing at cons, and the Fairy Tail commentary confirms that he is now officially stationed in Los Angeles instead of Texas! It doesn't help that their voices fall into similar niches; they've voiced characters that shared Japanese seiyuus a number of times. He has also performed in more games such as Street Fighter IV.

He owns and runs his own film company, arising from Hollywood not knowing what to do with an Asian actor "who doesn't look stereotypically Asian but doesn't fit the standard lead appearance either."note He's half-Vietnamese. Fun Fact: he was once a cast member of Barney & Friends (see here

), and he also had a supporting role in the Syfy original movie Scream of the Banshee.

MY BRAIN TREMBLES WITH THE LIST OF MY VOICE ROLES!!!:

"Hasta la pasta!~" Now I've got fire in my belly, i'm all fired up now!. *proceeds to punch someone* How Slothful!