Video Game / Atelier Firis: The Alchemist and the Mysterious Journey 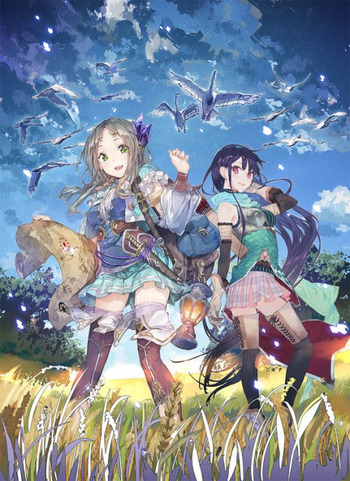 Firis with her older sister Lianne (European boxart)
Atelier Firis is the eighteenth game in the Atelier series and the second game of the Mysterious sub-series. Firis Mistlud is a young girl who lives with her overprotective parents and doting sister Liane in the underground mining village of Ertona. Firis has never left her home village since birth and obsesses over seeing the world outside but her parents and the village elder forbid it. Firis instead earns her keep by aiding the miners using her unique power to sense priceless ores within ordinary rocks. Then one day a pair of alchemists, Sophie and Plachta, forcibly destroy the entrance gate to the village. Firis is eager to learn of the craft when Sophie demonstrates its power and shows her around her Bigger on the Inside atelier. Firis proves to have an innate talent for the alchemy and immediately latches onto it as a way to finally leave Ertona. After Firis proves her seriousness in learning alchemy to her family and the elder by using it to perform tasks to help the development of Ertona, they grant Firis her wish to journey outside... but under the condition that she has only one year to demonstrate her independence by taking the alchemy exam in Reisenberg and becoming a licensed alchemist. Firis promptly packs her bags and sets off on her mysterious journey with her sister in tow, eager to prove her capability so she can explore the outside world forever...
Advertisement:

Atelier Firis was released in Japan for the Playstation 4 and Playstation Vita in November 2016, before its global release on both platforms as well as Steam in March 2017. On April 22, 2021, the game was released as part of a Compilation Rerelease of the Mysterious trilogy, which also brings the game to the Nintendo Switch for the first time.