Anime / B: The Beginning 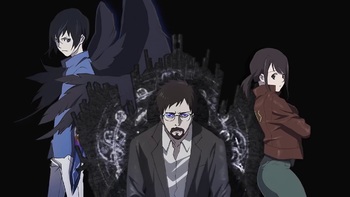 B: The Beginning is a Netflix original anime released on March 2, 2018. It was directed by Kazuto Nakazawa and Yoshiki Yamakawa* A regular director for JC Staff, this was his only effort for I.G, and was produced by Production I.G.

In the nation of Cremona, a series of gruesome murders have garnered the attention of the Royal Police's investigative agency, the RIS. The murders have been attributed to a Serial Killer named Killer B, who is named after the mark he leaves at the crime scenes. While the RIS struggle to catch Killer B, a mysterious organization begins its operations in the shadows.

The show is nominated in the Annecy Film Festival.

On June 12, 2018, the show's 2nd season, Succession, was announced with its six episodes released on March 18, 2021 worldwide on Netflix. Shout! Factory, through UK licenser Anime Limited, would release season 1 on Blu-Ray in North America in October 2020, as well as for a brief stint on YouTube.

See here for the debut trailer

B: The Beginning provides examples of: