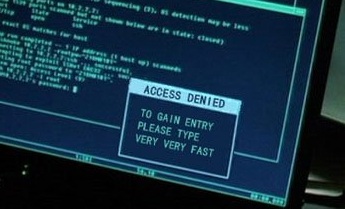 "I hope you don't screw like you type."
— Kate Libby, Hackers
Advertisement:

When the operator controls the computer by a continuous stream of clackity-clackity typing.

Anything can be done by a computer master through this technique. By typing so fast we can't see what they are doing. This trope is an effort to suspend disbelief where otherwise you would be left wondering why we can't see the screen at the time.

This rapid typing would make sense if one were merely typing a letter, but this is usually used to indicate programming or operating a system. There are no pauses to wait for a result, to think through the options, open a file or start a program. Even if they have a GUI, they don't use the mouse.

We rarely if ever have a clear view of the screen during instances of this; otherwise the gap between the typing and what's actually happening would be more obvious. Also, the astute listener will notice that the 'chunk' of the spacebar and the Enter key, which are distinct from the 'clickity-click' of the rest of the keys, is rarely if ever heard.

While some people actually are this fast at typing, they usually have to either rely on autocomplete, which requires advanced editors that supports this feature, or go back and delete spelling errors later, which is not an ideal state when programming. Not that anyone writes program code this fast anyway, because you always spend more time thinking about program logic and correcting minor errors. In fact, functionsnote the specific name may vary in each language, they may also be called "methods" or "subrutines" exist precisely to avoid the need to write walls of text or repetitive codes, and doing so instead of taking advantage of functions is a clear sign of bad programming.

Occasionally this can be justified through Truth in Television as many computer users can indeed do things quicker by using the keyboard exclusively though shortcuts instead of a mouse, especially if using command line interfaces or macro keys. Even more occasionally, more fantastic setting may present this as something deliberately weird, to hint (or illustrate) that a character is an android, a wizard or otherwise abnormal. This trope is about egregious uses of speed typing to control what a computer does.

Related to this is the Button Mashing in Hollywood depictions of people playing video games. May be featured in scenes involving Hollywood Hacking.