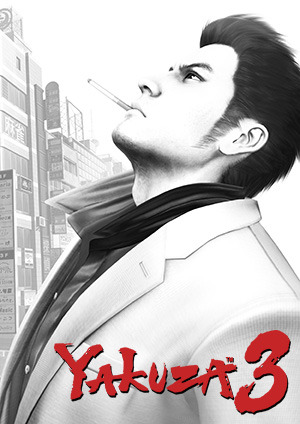 The legend of the Dragon of Dojima begins anew.
"Majima, I need you to support Daigo."
— Kazuma Kiryu
Advertisement:

Yakuza 3 (龍が如く3, Ryū ga Gotoku 3, lit. Like a Dragon 3) is the fourth entry in the Like a Dragon series, following the Japan-exclusive spin-off Ryū ga Gotoku Kenzan!, and the second game in the series to appear on the PlayStation 3. It was released in February 2009 in Japan, and the following year in the west. A remastered port for the Playstation 4 was released in August 2018 in Japan and August 2019 in the West as part of the Yakuza Remastered collection, with a PC (via Steam) and Xbox One ports of the remaster releasing on January 28, 2021.

After the last game, Kazuma Kiryu has now moved to Okinawa and is in charge of Morning Glory Orphanage along with his adopted niece, Haruka. The Orphanage is on a land that is owned by Shigeru Nakahara, the boss of a local yakuza clan known as the Ryudo Family. Nakahara is under pressure from the country's government to sell the land, which is the site of a government land grab, with one side wanting a military base and the other wanting a resort there. When his friend Daigo Dojima, Sixth Chairman of the Tojo Clan, is shot by a hitman bearing a familiar face, Kiryu must deal with the three gang bosses who arranged the attempted murder, and returns to the life he thought he left behind. Expect a large amount of Chronic Backstabbing Disorder.

This game has a little change of pace compared to Yakuza 2. The first quarter of the game only sees Kiryu in Okinawa with his kids, dealing with their various problems and occasionally butting heads with the local yakuza. However, once Kiryu learns more about the issues threatening the orphanage, he finds himself sucked back into the underworld and the life he thought he left behind.

Not as well-received as Yakuza 2, the game was also a bit notorious for the localized versions having omitted content compared to its original Japanese release. However, these features would return in the next game, Yakuza 4.

A remastered version of the game was released on the PlayStation 4 in Japan in August 2018 and a year later in Western territories. Unlike the previous two games, it was not a Kiwami remake

, instead just a straight remaster. Along with a boost in performance, the Remastered version includes much of the original game's cut content and adds a few new touches, such as a substory finder and English karaoke lyrics, although some things have been removed in all versions.

Kiryu and the CIA Agent

In one cutscene in the late game, the Japanese Kiryu has a conversation with a mysterious American CIA Agent. Both are able to converse in their native tongues without breaking a sweat.

Kiryu and the CIA Agent

In one cutscene in the late game, the Japanese Kiryu has a conversation with a mysterious American CIA Agent. Both are able to converse in their native tongues without breaking a sweat.