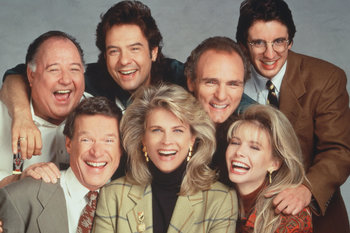 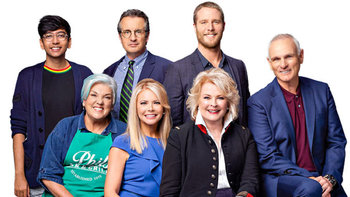 The show was hugely popular in its day due to its topical, often controversial storylines. What really put it on the map, though, was when Murphy became a single mother (unique for a sitcom at the time) and the show portrayed this in a positive way (unique for any TV show at the time.) Conservatives balked, especially then-vice president Dan Quayle, who attacked the show as being against "family values." The show responded by directly mocking Quayle, and this little feud propelled it to the top of the ratings. Various other politically-charged storylines kept the show afloat for a ten-year run, and the show won Candice Bergen five Emmy awards for Best Actress in a Comedy Series.

Twenty years after it originally went off the air, CBS announced in 2018 that a revival of the series was in the works, officially premiering in September of that year. Most of the original cast returned to reprise their roles, with the additions of Tyne Daly as the sister of bar owner Phil (his actor died in 2006) and Jake McDorman as Murphy's son Avery, now an adult. In the revival, Murphy is galvanized to return to news television after Donald Trump is elected President, only to discover that Avery —who has since become a news pundit on a conservative network— is hosting a show of his own in the same timeslot. The revival only ran for a single season, officially ending after CBS chose not to order further episodes following its season finale.

The 2018 revival series provides examples of: