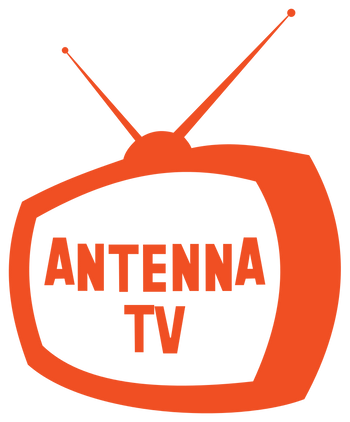 TV how it was meant to be.
Advertisement:

Antenna TV is an American broadcast television network owned by Nexstar Media Group that airs classic television series, largely sitcoms, which launched on January 1, 2011. Much of its programming comes from the libraries of Sony Pictures Television, DLT Entertainment (the production company behind Three's Company), 20th Television and NBCUniversal Television (which are shared with MeTV), as well as several shows from other libraries.

The network carries classic series that mainly originally aired between the 1950s and the 1980s, however in the past it has also included a few series from the 1990s (such as Married... with Children, The Nanny and NewsRadio). Based in Chicago, where its chief rival Me-TV also originated, Antenna TV is named for its distribution model, as it is one of many networks available primarily through antenna reception on the digital subchannels of broadcast television stations, with most of its initial affiliates coming from the Tribune and Local TV, LLC station groups (the latter of which Tribune would acquire outright in 2013, with Tribune itself later being bought by Nexstar).

In 2021, a spinoff channel called Rewind TV would be created, and all of Antenna's shows created after 1985 were migrated to that station.