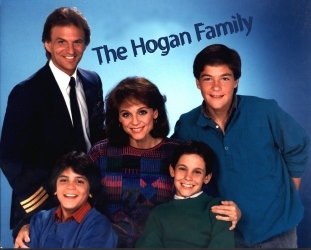 The Hogans circa 1986.note Clockwise from top left: Michael, Valerie, David, Mark and Willie
The Hogan Family was a Dom Com that, known also in earlier incarnations as Valerie and Valerie's Family (The Hogans), aired on NBC from 1986-1990, and on CBS from 1990-1991.
Advertisement:

The series originally was built as a starring vehicle for Valerie Harper, whose best known role beforehand was as the title character in the 1970s sitcom Rhoda (which spun off from The Mary Tyler Moore Show). Set in Oak Park, Illinois, Valerie Hogan (Harper) was a career woman (the owner of an auction house and later, a graphic designer) whose airline pilot husband, Michael (Josh Taylor, who concurrently starred on Days of Our Lives), was frequently gone, meaning she had primary responsibility of raising the couple's three sons: 16-year-old David (Jason Bateman), and 12-year-old twins Willie and Mark (Danny Ponce and Jeremy Licht). Valerie had a couple of best friends, but the one that stuck around was the busybody (but very sweet) next-door neighbor Patricia Poole (Edie McClurg).

Things went according to form during the early years, but in the spring of 1987, Harper and producer/boyfriend Tony Cacciotti became embroiled in a bitter dispute with Miller/Boyett over a decision to shift the focus of the show's stories to a comedic focus (with teen heartthrob Bateman being the major part of the plan). Eventually, Harper was fired... and Valerie Hogan (along with her best friend, Annie) was promptly killed in a car accident sometime during the summer of 1987.

Fall 1987. Enter Sandy Duncan, the petite actress with plenty of comedic timing, to take over... not as Valerie Hogan (as the character was McLeaned) but as Michael's kid sister, Sandy. Sandy took a job as guidance counselor at the high school David attended; the series was re-titled Valerie's Family with the subtitle The Hogans used in the main titles. The focus of several episodes during the 1987-1988 season was on Val's passing and the family coming to terms with their grief; none, however, made such a profound impact as the episode "Burned Out", in which a poorly made lamp sparks fire and engulfs much of the house. Many keepsakes and mementos of the family's were destroyed in the attic and second floor, but the piece having the greatest emotional effect was a charred framed photo of Valerie, over which David breaks down in tears upon discovering it while exploring the burned-out second floor. It was also at this point that Mrs. Poole moved up to being a regular character, even appearing in the opening credits for the first time.

In the summer of 1988, to distance the series from the now long-departed Harper, the producers dropped the name Valerie completely from the title: The series was now known as The Hogan Family. Stories shifted back to typical family situations, many with comedic bents, although some were deadly serious. Two of those stories focused on David's best buddy, Rich (Tom Hodges): One where David locks a drunken Rich in the closet during a house party to keep him from driving drunk (during the 1987-1988 season, not long after Val died), and one of the last original episodes, in which Rich does die (of AIDS). In 1990, Michael and Sandy's newly-divorced father, Lloyd (Jonathan Hillerman), moves in with the family... at the same time the series moved to CBS. That and other changes did nothing to stop a slowly diminishing audience, and the series ended its run in the summer of 1991.

Roberta Flack provided the soulful vocals to the theme song, "Together Through the Years." In syndication, all episodes are known as The Hogan Family. Though it was one of the highest-rated series on TV during its heyday, it was rarely shown after some point during the Turn of the Millennium, until Antenna TV thankfully picked up the show and began airing it in December 2017.