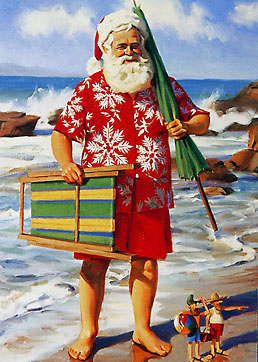 We all know when Christmas is, right? Late in December, just after the beginning of winter, when it's always covered in snow, right? Wrong! Christmas happens in the summer, too. It's true, some people just can't wait to get into the Christmas Spirit. So they decide to celebrate Christmas right there in the middle of July. Great concept, no?

This will often serve as the premise for Christmas Episodes in which the show takes place primarily in the summer. All the same plots, motifs, and messages of all other Christmas Episodes will still be present. In fact, expect all the characters to completely forget that it isn't actually Christmas at all.

There is some Truth in Television, as mentioned by That Other Wiki.

Most holiday TV specials and movies are filmed during the summer season (so you're sweating like a pig...), and some stores do offer Christmas In July sales to get rid of all their old Christmas stock. The crafting community especially embraces Christmas in July, making all their wreaths, decorations and other Christmas crafts in July to either keep for themselves or sell at craft sales in November. And media producers like to use July to present and make money from their Christmas specials that would otherwise be mothballed for the other 11 months of the year (or 9 months, really).

Of course, in the southern hemisphere, Christmas really does fall in midsummer, so Christmas in Australia is closely related. Some parts of the world, such as Australia but also places such as New Zealand, South Africa, the Falklands and parts of the Americas really do hold Christmas in July celebrations; The first four do so because the weather around July is in midwinter, around the time when the weather is more fitting to the ideas of what a traditional Christmas is in the Northern Hemisphere. Although if you go far south enough, like in the Falklands and southern Argentina, you can sometimes have a White Christmas on actual Christmas, as it's cold enough to snow in the summer sometimes.

Compare Christmas Creep, another trope about getting into the holiday spirit early (the two have overlapped more and more in recent decades).

Meatwad uses his magic shirt to summon Santa Claus in July, which really ticks him off.

Meatwad uses his magic shirt to summon Santa Claus in July, which really ticks him off.