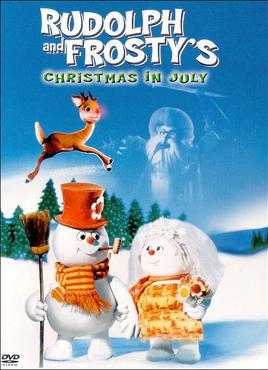 The Avengers of 1979
Advertisement:

Rudolph and Frosty's Christmas in July is a Rankin/Bass Productions Christmas Special, which premiered on ABC on November 25, 1979. It is notable for having several Christmas and winter icons — Rudolph, Frosty the Snowman, and Santa Claus — in the same special, along with characters from past specials making appearances.

Long before Santa Claus came to power, the North Pole was ruled by a Sorcerous Overlord called Winterbolt. He was defeated when the Northern Lights took human form and cast him into a deep sleep. But as Lady Boreal says, "Nothing is forever". Upon awaking, Winterbolt determines to upend Santa by creating the worst snowstorm ever — the snowstorm, in fact, only to be foiled once again by Lady Boreal, who created Rudolph's shiny red nose to counter Winterbolt's magic.

In the summer of July, the appearance of a hot balloon ice cream salesman and the troubles of a circus by the seashore give Winterbolt the means to destroy Santa — by trapping Rudolph and Frosty's family in a no-win situation far from Santa's territory, where only Winterbolt's magic can keep the Frosty family from melting in the July sun!

This special marked the final appearance of these versions of the lead characters under the original Rankin-Bass Productions, but later (non-stop motion) specials with the same character designs would follow decades later, like Rudolph the Red-Nosed Reindeer and the Island of Misfit Toys, The Legend of Frosty the Snowman, and A Miser Brothers Christmas. This special also marked the final time Billie Mae Richards (Rudolph) and Jackie Vernon (Frosty) voiced both characters. A modified and softened version of Jack Frost starred in his own eponymous Rankin-Bass special a few months later.

Rudolph and Frosty's Christmas in July provides examples of:

When Winterbolt's scepter is destroyed, he loses his powers and turns into a lifeless tree.

When Winterbolt's scepter is destroyed, he loses his powers and turns into a lifeless tree.