Theatre / Annie Get Your Gun 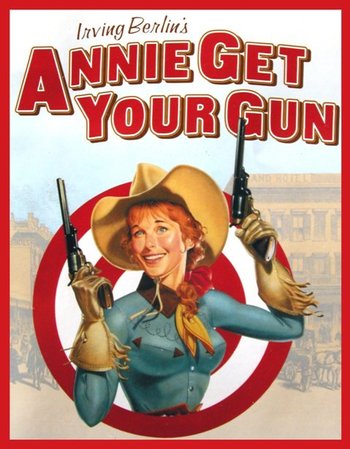 A 1946 musical developed by Irving Berlin and siblings Herbert and Dorothy Fields, under the supervision of producers Rodgers and Hammerstein. Ethel Merman originated the title role, and sang many a classic standard, including "There's No Business Like Show Business." A film version, with Betty Hutton in the lead, was released in 1950. The musical has been revived several times since on Broadway, most recently starring Bernadette Peters, Reba McEntire, and Susan Lucci (All My Children).

It follows the tale of one Annie Oakley: sharpshooter, and the man she'll one day marry, Frank Butler: sharpshooter. They meet when he's the star of Buffalo Bill's Circus, but it's rivalry, not love, at first sight. It's going to be hard, but eventually, they do finally get together in the end.