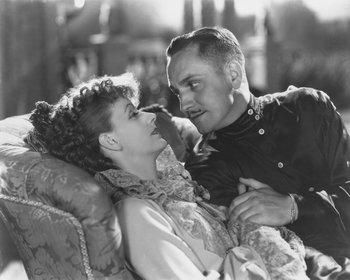 No prizes for guessing what it's adapted from. Anna Karenina (Garbo) is stuck in an unhappy, loveless marriage with the cold, forbidding Karenin (Basil Rathbone). She travels from St. Petersburg to Moscow to help patch up her goofy brother Stiva's marriage, and as she gets off the train she meets the dashing Count Vronsky (March), a cavalry officer. Vronsky is captivated by the exotically beautiful Anna, and love-starved Anna soon gives in. Karenin, who cares far more about his position and social standing, makes little attempt to repair his marriage, but also refuses to give Anna a divorce, instead banishing her from their home.

This was the second time Garbo played Anna Karenina, having previously starred with John Gilbert in a 1927 adaptation with the terrible title of Love.