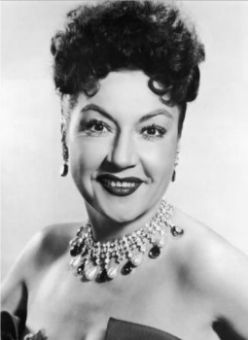 It is virtually impossible to overstate Merman's position in Broadway history. She has been called "the Undisputed First Lady of the musical comedy stage" with very, very good reason.

Merman made her Broadway debut in the Gershwins' Girl Crazy and was an immediate smash, to the point where George Gershwin, upon hearing that she had never taken a singing lesson in her life, advised her to keep it that way. The lengthy career that followed put anyone before or since to shame, including roles in some of Broadway's most legendary and influential musicals.

She also made her mark in Hollywood, with one particular highlight being her portrayal of the (hopefully) ultimate in shrewish mothers-in-law in It's a Mad, Mad, Mad, Mad World. She also starred in the Irving Berlin Jukebox Musical Alexander's Ragtime Band, and had a memorable cameo in her last film appearance, in Airplane!.

Merman was married for 42 days to actor Ernest Borgnine. In her memoir Merman, there is a chapter titled "My Marriage to Ernest Borgnine". It is a blank page.

Her Most Notable Musicals: