Theatre / Anne of the Thousand Days 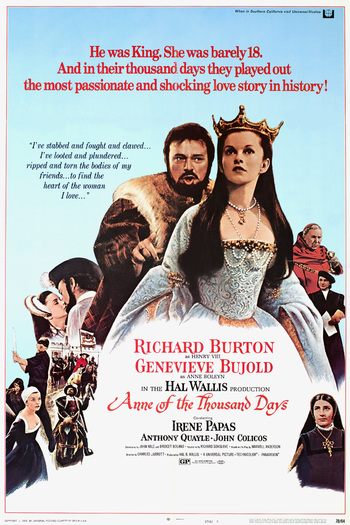 "She has the face of a simpering sheep. And the manners. But not the morals. I don't want her near me."
— Anne Boleyn, about Jane Seymour
Advertisement:

Anne of the Thousand Days is a 1948 play by Maxwell Anderson, about Henry VIII and his marriage to Anne Boleyn.

Having ditched his first wife, Katharine of Aragon, Henry sets his sights on Mary Boleyn. He changes course and heads for her sister, Anne. They wed, but their bliss ends when she gives birth to a daughter, instead of the son Henry wants. Afterwards, Henry goes for Jane Seymour and tries to find a way out of his current marriage.

Due to its subject matter, studios weren't eager to film the play just after its debut. The film version, directed by Charles Jarrott and starring Richard Burton and Geneviève Bujold, came out in 1969, shortly after The Hays Code was abandoned. Out of its ten Academy Award nominations, its only win was for its elaborate costumes.

Tropes found in the play and the movie include: