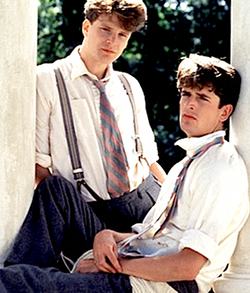 Turning the come-hither look up to eleven
Advertisement:

Another Country is a 1984 movie by Julian Mitchell about the Cambridge Five spy ring, based on his play and starring Rupert Everett and Colin Firth.

The film uses an interview between a reporter and Rupert Everett as Guy Bennett (loosely based on real-life spy Guy Burgess) to frame the narrative, which is set at a Cambridge boarding school in the 1930s. Bennett is gay and mostly apolitical in the beginning, mainly interested in bedding a particularly winsome blond hunk. His friend Tommy Judd (Firth) is straight, but outspokenly socialist.

Homoerotic and political complications ensue, whereupon Guy finally comes to the groundbreaking realization that England in the 1930s is not exactly the mostly friendly place to be for someone who is openly gay and decides to emigrate to (and later spy for) the Cold War Soviet Union, because presumably that is the best place to go when you want maximum personal liberty and freedom of expression. Umm, right. So the film's explanation of Burgess' motives does not make a whole lot of sense, but it is still very nice to look at.

The film won an award at the 1984 Cannes Film Festival.