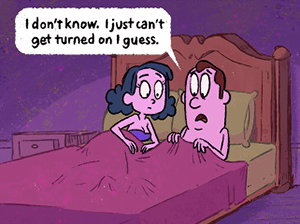 "The spirit was willing but the testicles were weak."
— The Wolf's Hour by Robert R. McCammon
Advertisement:

When a character about to have sex cannot get it up. The cause is often a sexual version of Performance Anxiety, but may also sometimes be related to Unresolved Sexual Tension — for someone other than the person they're with at the moment. The "guy can't get hard for girl(s)" variation is the most common — the phrase, "It's okay, this sort of thing happens to lots of guys," is closely associated with this trope.

Usually a comedy trope, since the situation is usually temporary, and playing it for drama lasts longer. Double points if something like, "I'm sorry, I swear this has never happened to me before…" or the above-mentioned, "It's okay…" phrase shows up in the dialog.

Can be Truth in Television (and there are usually other ways to get the job done). One of the leading causes is the classic panic attack, which causes an adrenaline rush and in turn diverts blood flow away from the genitals - quite a lot of blood heads downward to facilitate sexual activity, yet much more blood is diverted back upwards when adrenaline is involved, mostly so that your essential organs can function at their best. Other common causes of erectile dysfunction include age (it's four times more common among men in their 60s than those in their 40s), poor cardiovascular health, stress, smoking, and excessive alcohol consumption.

) is not unheard of but, as the above description suggests, the male version is infinitely more common in fiction. There's an additional Double Standard in that male examples are almost invariably played for comedy with the man being the butt of the joke: female examples either tend to attribute the character's lack of lubrication to her partner's sexual inadequacy or unattractiveness, or to deep-seated psychological issues or traumatic sexual experiences.

Named as a pun for a song note "The Lion Sleeps Tonight" that has absolutely nothing to do with impotence, but the Double Entendre is too good to pass up.

Contrast Raging Stiffie, Speed Sex (for when the guy goes off too quickly rather than not at all), Something Else Also Rises. Parodies of the latter are occasionally used as a visual gag — e.g. a skyscraper collapsing. Think Unsexy Thoughts is an inversion of this.

Rutherford is able to make it to Billups to stop in time from losing his virginity because Billups has a hard time rising for the occasion, having never had sex before.

Rutherford is able to make it to Billups to stop in time from losing his virginity because Billups has a hard time rising for the occasion, having never had sex before.