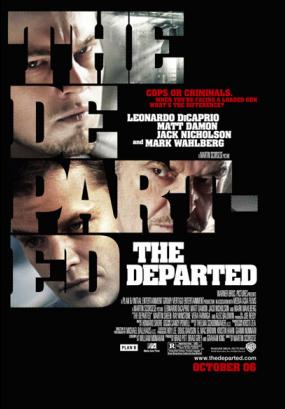 "We deal in deception here. What we do not deal with is self-deception."
"When I was your age they would say we can become cops, or criminals. Today, what I'm saying to you is this: when you're facing a loaded gun, what's the difference?"
— Francis "Frank" Costello
Advertisement:

The Departed is a 2006 American crime-thriller film and remake of the 2002 Hong Kong crime thriller Infernal Affairs.

In Boston, Massachusetts, notorious Irish Mob boss Francis "Frank" Costello (Jack Nicholson) takes neighborhood boy Colin Sullivan (Matt Damon) under his wing, and grooms him to be his informant within the Massachusetts State Police. Colin rises through the rank and file to get himself placed on an investigation unit that is working to bring down Costello.

Meanwhile, William "Billy" Costigan, Jr. (Leonardo DiCaprio) is seeking to become a cop, despite the fact that he comes from a family that has a very disreputable past and numerous ties to organized crime. His interviewers eventually decide, when Billy refuses to be intimidated out of dropping out of the academy, to arrange for him to go to prison on a trumped-up assault charge, giving him a criminal record and street cred so that he can infiltrate Costello's crew. When both sides of the law realize the situation, both Colin and Billy attempt to discover the other mole's true identity before being found out.