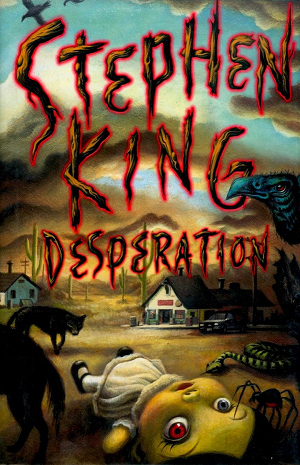 Desperation is a 1996 novel by Stephen King turned into a movie in 2006. It begins on Highway 50 in Nevada, a place some refer to as the loneliest place on Earth. A couple, Mary and Peter Jackson, are on their way back from a visit with friends when they are stopped by a sheriff who behaves strangely and discovers pot in their trunk, (accidentally left in there by Peter's stoner sister) and takes them to jail in the seemingly abandoned mining town of Desperation.

On the way there, he recites the Miranda warning, only mixing "I'm going to kill you" in with it, which unnerves the couple.

The cop proceeds to abduct more people as they pass through the lonely Nevada road, using one excuse or another. He repeatedly speaks in a strange, guttural language and seems to have literal control over the local animals, such as coyotes, insects, and birds.

Soon he gets Johnny Marinville, a recovering alcoholic writer. He beats Johnny up and takes him to Desperation, but not before he gets in a call on his cell phone to his following-chauffeur Steve Ames (Johnny is riding on a motorcycle, Steve is there to pick him up if the weather gets too foul, etc.), who later arrives with a girl named Cynthia Smith. A family of four, the Carvers, is also stopped and hauled into the Desperation jail.

Several of them are killed by the cop, whose bizarre statements and mannerisms escalate into violence and murder sprees. The dead appearance of the town is no coincidence. Among the survivors is a boy named David, who seems to have a special connection and communication with God. With little time and little choice, the group must establish a chain and fight to survive against the growing evil. The miners Dug Too Deep, and Tak, an Ancient Evil driving this nightmare, wants to play.