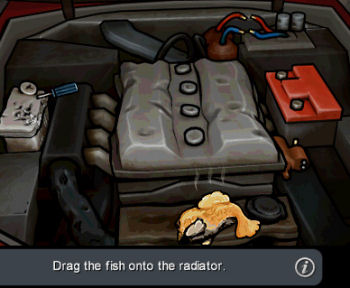 When a character maliciously tampers with someone else's vehicle prior to it being driven. Since Every Car Is a Pinto, this can turn a pleasant family drive in the trusty minivan into a hurtling terror ride in a burning metal death trap. In other situations, less dangerous methods may be used simply to slow the would-be driver down or to get revenge for a previous slight.

Any type of vehicle imaginable can be subject to Vehicular Sabotage, as long as there is a character with the tools and knowledge to pull it off. Anything from the trusty "unhinging the wagon wheels" ploy, to the "cut the brake lines" scheme, to the "overload the Phlebotinum-converter" gambit (and anything in between) can qualify, as long as it is the result of a deliberate action and not simple mechanical failure.

is becoming common, combining this trope with Hollywood Hacking.