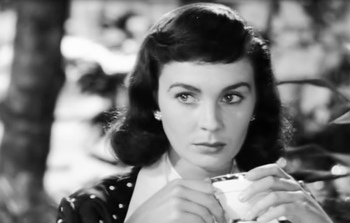 Frank (Mitchum) is a former race car driver now driving an ambulance, who has ambitions of opening his own race car garage shop. He also has a pretty blonde girlfriend, a nurse named Mary (Mona Freeman). His ambulance is called to the Tremayne residence, where Grande Dame Catherine Tremayne (Barbara O'Neil) has been overcome by the fumes from a fireplace. Catherine turns out to be fine—she was rescued from the fumes by her husband Charles (Herbert Marshall) in time, and doesn't even need to go to the hospital. Her gorgeous stepdaughter Diane (Simmons) notices handsome Frank and takes a fancy to him.

Diane follows Frank's ambulance, follows Frank to a diner, and gets him to take her out. She then arranges a meeting with Mary in which she tells Mary about their date, causing Mary to break up with Frank. Diane gets her hooks further into Frank by getting him a job as chauffeur at the Tremayne mansion. It eventually becomes clear that the business with the gas in the fireplace wasn't an accident, and Diane has murderous intentions towards her stepmother.

Produced by Howard Hughes, who had an unhealthy obsession with Jean Simmons. She was cast in this film when Hughes refused to let her do Roman Holiday because she wouldn't date him (Simmons was married). Simmons later retaliated by suing Hughes and RKO to get out of her contract.