Film / Where the Sidewalk Ends 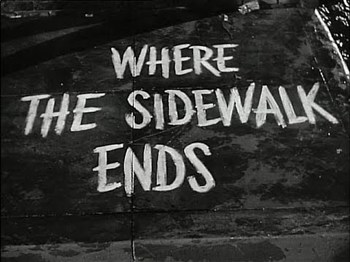 Where the Sidewalk Ends is a 1950 Film Noir, directed by Otto Preminger and starring Dana Andrews and Gene Tierney. The screenplay by Ben Hecht was adapted from the 1948 novel Night Cry by William L. Stuart.

Mark Dixon (Andrews) is a violent NYPD cop haunted by his father's criminal past. When he accidentally kills Ken Paine (Craig Stevens) while investigating a murder, he hides his crime and tries to pin it on a kingpin criminal, Tommy Scalise (Gary Merril). Dixon is unable to prove the Scalise connection, however, and more problems arise when his superior, Lt. Thomas (Karl Malden), is convinced that Paine’s father-in-law, Jiggs Taylor (Tom Tully), committed the murder. Incapable of confessing to the crime, Dixon tries to set things straight by helping Jiggs's daughter, Morgan (Tierney), find legal help.

Not to be confused with the children's poetry book of the same name by by Shel Silverstein.

Where the Sidewalk Ends shows the following tropes: