Literature / Where the Red Fern Grows 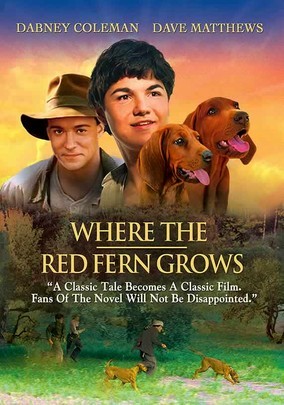 Where the Red Fern Grows is a 1961 children's novel by Wilson Rawls, about a boy named Billy Coleman and the adventures he has with his two coonhound dogs, Old Dan and Little Ann, in the Ozarks of Oklahoma during the 1930s. Billy spends two years earning enough money in order to buy the puppies. After that, he trains them to hunt raccoons, with Old Dan displaying strength and Little Ann displaying intelligence. Over time they become known as the best coonhounds in the area.

Not long after earning local fame, two boys named Rubin and Rainie, of the Pritchard family, challenge Billy to a raccoon hunting contest. They say that no hound could ever chase the "ghost raccoon," a raccoon that lives near the Pritchard's home. Billy tries to ignore the challenge, but the Pritchards are mean, and start to talk about Billy's grandfather. His grandfather starts getting furious and tells Billy to accept the challenge so that Old Dan and Little Ann can chase it. After a few hours of hunting and going through the ghost raccoon's tricks, Little Ann chases the raccoon. When Billy does not want to kill it, starting to gain respect for the animal, Rubin and Rainie get angry, and at that time the Pritchards' blue tick coonhound comes up and challenges Old Dan. Rubin tells Billy, saying that his dog will easily beat Old Dan, then, Little Ann joins to protect Old Dan and the blue tick coonhound loses quickly. Rubin worries for his dog's life, and grabs Billy's axe and runs toward Old Dan and Little Ann, trying to kill them. Rubin then trips, falling on the axe and dying due to his injuries.

A few weeks later, Billy's grandfather enters him into a championship raccoon hunt, putting Billy against experienced hunters and the finest hounds in all the country. Before the hunt started, Billy enters Little Ann into a contest for the best-looking hound, where she wins and is given the silver cup. On the fourth night of the hunt, Old Dan and Little Ann chase three coons, making it to the final round. The sixth night, the dogs chase one raccoon before a blizzard hits. Billy, his dad, grandfather, and the judge lose sight of the dogs, and when they finally find them, Billy's grandfather falls and sprains his ankle which prevents him from walking. They build a fire, and when Billy's dad chops down a tree, three coons rise. The dogs take down two of them, and chase the final raccoon to another tree. In the morning, the hunters find out the two dogs covered with ice circling the bottom of a tree. This last coon wins them the championship, and the gold cup.

One night, after the hunt, Billy and his dogs chase a mountain lion, who attacks the dogs. Old Dan is seriously wounded, but holds off the animal long enough for Billy to get the killing blow. Billy rushes his dogs home, but Old Dan's wounds are severe and he dies a few hours later. Little Ann survives the attack, but dies of a broken heart a few days later by Old Dan's grave, since she lost the will to live without him. Billy buries her next to Old Dan.

It is revealed that the family has been saving the dog's earnings from Billy's raccoon furs, as well as the dogs' winnings from the championship raccoon hunt. With that money, the family can finally afford to move to town. On the day that Billy and his family leave the farm, Billy visits his dogs' graves to say goodbye. When visiting, he sees that a large plant has grown between the two hounds, a red fern. According to an old Indian legend, only an angel can plant a red fern and wherever it grows is sacred. With this sign, Billy is finally able to recover from his loss.

The book was adapted into a movie in 1974. A Direct to Video sequel was made in 1992 set after Billy returns home from World War II. Another movie adaptation was released in 2003.