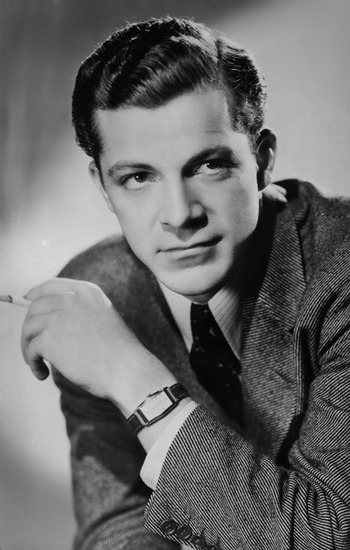 "All people are half actors."
Advertisement:

Carver Dana Andrews (January 1, 1909 – December 17, 1992) was an American actor during The Golden Age of Hollywood, famous for his Tall, Dark, and Handsome detectives which regularly appeared in classic films noirs.

Starting out as a gas jockey and accountant but with Hollywood aspirations, Andrews was discovered and signed by Samuel Goldwyn in 1938, with his first movie role coming in Lucky Cisco Kid two years later. The early Forties gave him bit parts such as a gangster in Howard Hawks’ Screwball Comedy Ball of Fire, and a lynching victim in the William A. Wellman drama The Ox-Bow Incident. But it wasn't until he was loaned out to 20th Century Fox that his Star-Making Role came as the portrait-obsessed detective in Otto Preminger’s Laura, a classic of the Film Noir genre. Here Andrews portrayed a man torn by complex emotions, a running theme in many of his roles. Andrews would later work with Preminger several more times, though without duplicating the success of their first collaboration. Another big role came in 1946 with William Wyler's drama The Best Years of Our Lives, in which he plays a war veteran suffering from PTSD.

He also was an accomplished opera singer, a talent which he was only able to show off in one film, The North Star.

A talented actor, Andrews never much cared for the Hollywood lifestyle, in contrast with his peers. Although alcoholism was a constant battle and is generally attributed to hindering his stardom, he was able to finally curb the addiction in 1969.

However, Andrews did stack up quite the résumé, working with several of the best directors of his era: John Ford, William Wyler, Fritz Lang, Otto Preminger, Elia Kazan, and Lewis Milestone, just to name a few. He also costarred with Gene Tierney in five films.

Though his major roles were behind him by the '60s, throughout that decade and into the '70s he continued to work on stage and have supporting roles in films and television, most notably appearing in the all-star cast of Airport.

His younger brother Steve Forrest was also an actor.