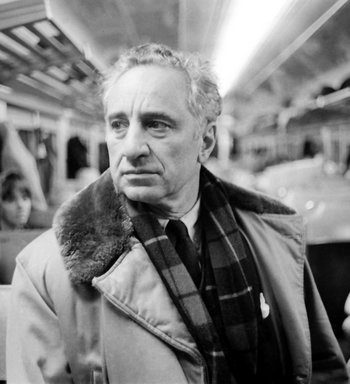 "Conscience...that stuff can drive you nuts."
"What's called a difficult decision is a difficult decision because either way you go there are penalties."
— Elia Kazan, describing his situation as a "friendly witness" during the years of The Hollywood Blacklist.
Advertisement:

Born in Constantinople (now İstanbul) to Greek parents, Kazan immigrated with them to the United States in 1913. He grew up in New Rochelle, New York and attended Williams College, followed by the Yale School of Drama. Kazan became a pioneer in the performing arts as a director of several ambitious stage plays. He mounted the original productions of Arthur Miller's Death of a Salesman and Tennessee Williams' A Streetcar Named Desire and Cat on a Hot Tin Roof. For Streetcar, he cast a young unknown actor named Marlon Brando, a decision that revolutionized acting forever. He is one of the founders of the Actors Studio, and could easily be credited with helping to define film acting as its own unique craft.

In movies, he directed Brando in the film adaptation of Streetcar, as well as On the Waterfront (for which he won an Academy Award for Best Director and created a true Hollywood classic) and Viva Zapata!. He also directed James Dean in East of Eden (though he personally didn't like Dean) and in his last film, he directed Robert De Niro in The Last Tycoon. The performing arts, and modern American cinema as we come to understand it, was more or less made and codified by Kazan, whose influence has been inescapable.

Such an impressive body of work, however, rests side-by-side with his most controversial action, which has in some circles become proverbial. He served as a "friendly witness" for the House Committee for Un-American Activities at the height of the Red Scare. He initially testified admitting to being a former communist in the '30s but he refused to "name names". He subsequently did do so, when placed under pressure. This made him Persona Non Grata among many of his former leftist friends for whom Kazan could Never Live It Down. Kazan was not the only major artist to "name names", almost everyone did, but unlike others, he refused to apologize for his action, even putting out an ad in the newspapers justifying this decision and asking others to come forward. Not long after he made this decision, he made On the Waterfront, a film that has at times, been read as an allegory for his own struggles, something that Kazan has both admitted to and waverednote As Kazan noted, his involvement with the pre-production of that film preceded his testimony and most of the film was based on real-life incidents on the docks and the union corruption there, which had nothing in common with his situation. Kazan defended his actions by pointing out that while he may have named names, he only gave useless names to the Committee, the ones who would have been blacklisted anyway, and the CPUSA's strategy against McCarthyism was poorly conceived and exploitative of artists for the benefit of a political ideology that had become a mask for hypocrisy by The '40s and The '50s. Critics rebuked him by pointing out that by taking the public stance he did, as a prominent liberal and public intellectual, he legitimized the HUAC's pretensions of being a sincere anti-communist crusade rather than a right-wing committee that trampled on civil liberties. Nearly half a century removed from the HUAC hearings, there were protests outside the Dorothy Chandler Pavillion during the ceremony where Kazan won an Oscar for Lifetime Achievement. Many in attendance refused to stand and applaud.note The debate wasn't so much on whether Kazan deserved the award, artistically even his critics admitted that he was deserving. They merely pointed out that the AMPAS and Hollywood studios, in general, had never truly given a public apology or restitution for the careers it ended, and honoring Kazan before doing that seemed galling

Despite this, one mustn't get the impression that Kazan became a simple anti-communist ideologue overnight. Kazan remained a liberal and a leftist and resented the Communists for monopolizing all kinds of opposition on social issues, which remained a constant interest for him. He identified himself as an anti-communist Leftist, an Internal Reformist who sought to play a role in American culture by making many critical films in the '50s, and in the 60s. In addition to this, he supported the Civil Rights Movement and other liberal causes, counting Tennessee Williams and James Baldwin among his friends. As a director, Kazan was a trailblazer in pushing forth sexually suggestive and aggressive content to audiences, making films like Baby Doll as well as A Face in the Crowd, a dark satire of media that anticipates films like Network. His influence on American cinema was phenomenal with even his former friends admitting his great talent. He played a major role in ending censorship in American cinema, alongside the likes of Otto Preminger and Billy Wilder. He was especially influential on the New Hollywood, Francis Ford Coppola and Martin Scorsese especially. The former was initially going to cast him as Hyman Roth in The Godfather Part II which eventually went to Lee Strasberg (famous acting teacher and rival) instead. The latter would in time befriend Kazan, and played a part in helping him receive his Honorary award, even personally presenting the award to him, alongside Robert De Niro.

In his later years, he found fame as a novelist and wrote an autobiography, Elia Kazan: A Life that was highly praised for its good writing and for its fairly honest look at a contentious personality.

Kazan was married thrice. His second wife Barbara Loden was an actress (on Wild River) whose lone directorial effort Wanda is a great film in its own right. He has several children and grandchildren active in film production. (Zoe Kazan is his granddaughter.). He died in 2003 but his legacy — and controversy — lives on.

Films directed by Elia Kazan include: