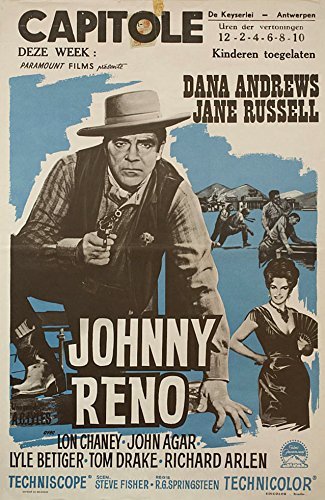 Johnny Reno is a 1966 American Western film made by A.C. Lyles Productions and released by Paramount. It stars Dana Andrews, Jane Russell, Lon Chaney Jr., and John Agar. It was directed by R.G. Springsteen, produced by A.C. Lyles, with a screenplay by Andrew Craddock, Steve Fisher and A.C. Lyles.

U.S. Marshal Johnny Reno is heading to the small town of Stone Junction in order to see his one-time sweetheart Nona Williams. On the way, he is set upon by two brothers who think he is after them. Forced to shoot one, he captures the other, Joe Conners, and brings him into town. His prisoner insists he is innocent of the crime the whole town wants him hanged for, and after hearing his story, will Reno believe him?

Tropes in Johnny Reno include: