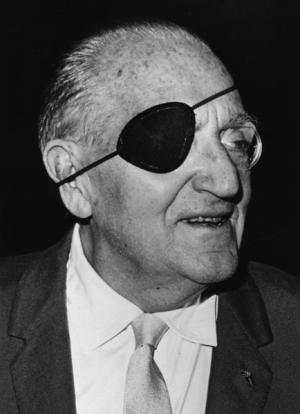 A High-Class Glass and an Eyepatch of Power.note Unfortunately, not on the same eye.
"I should say that I am a visual person. I experience with my eyes and never, or rarely, with my ears... to my constant regret."
Advertisement:

Friedrich Christian Anton "Fritz" Lang (December 5, 1890 – August 2, 1976) was an Austrian-German director known for his trope-making films in the Golden Age of German and Hollywood cinema. After trying first to be an architect and then a painter, Lang got into the film industry after serving in World War I, as both a writer and actor before becoming a director. In the early 1920s, he met his second wife, screenwriter Thea von Harbou, who he collaborated with on all his films for the next decade. This period included Metropolis, Die Nibelungen, the Dr. Mabuse series, and M, which are probably his most famous works and made him the most famous, influential and celebrated film director of the Weimar era.

Lang left Germany when Hitler came to power — often claiming that he left the same night Goebbels asked him to join the Nazi party, though available evidence disputes this — and started over in Hollywood.note At the same time Lang was leaving Germany, he and von Harbou got divorced; she stayed in Germany and wrote screenplays for the Nazis until the end of the war. Though Lang made significant contributions to the film noir and western genres with films like You Only Live Once, Fury, Western Union, The Woman in the Window, and The Big Heat, he felt stifled by the restrictive studio system and returned to postwar West Germany, where he continued to make films until he went blind in the mid-1960s.

Even if you've never seen one of Fritz Lang's films, chances are that you've seen a reference to or parody of one of them, most likely Metropolis or M.

Films by Fritz Lang include:

Tropes created, typified, or recurring in his work include: