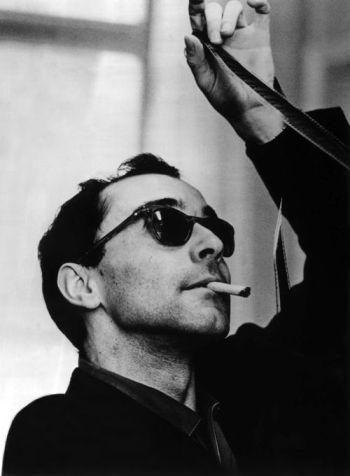 "Photography is truth. The cinema is truth twenty-four times per second."
Advertisement:

He grew up in Switzerland but was born in and made his name Paris, France as a film critic, writing for the movie critic magazine Les Cahiers du Cinema founded by André Bazin and part of a circle of friends that included, François Truffaut, Eric Rohmer, Claude Chabrol, Jacques Rivette and others. Together they dreamed of shaking up what they felt was the inferior French films of the '50s, taking inspiration from American, Italian and Japanese films they saw at the Cinematheque and believing the director was the artist and that it was possible to make films which were as personal as a book was to an author. The Nouvelle Vague was born, along with the concept of The Auteur Theory.

Godard became something bigger. He might be to the movies what James Joyce is to literature, Pablo Picasso is to painting, and David Bowie or Bob Dylan to popular music. These artists had a firm awareness of the history of their mediums, a huge range of references and a strong intellectual vision and they expanded the medium to areas never before seen, inventing new techniques that were controversial at the time but eventually provoked many imitators who tended to be more successful than their inspirations. Godard was no different.

His films are studied and viewed around the world. They are taught in film schools whose graduates go on to create ad films and music videos or go into other fields but who follow his inspiration or react against it one way or another. He had a huge following among the New Hollywood. Francis Ford Coppola at one point presented his films in America for release and he and Godard planned to collaborate. Martin Scorsese has always testified to his influence as well. That said, in later years, he became very unflattering to American films and especially the films of Steven Spielberg though he liked Woody Allen enough to make a movie about him (Meeting WA) and cast him in one of his works. In Europe, he's an inescapable influence with directors dividing movies pre and post Godard with his Meaningful Name and his own love for puns leading to the easy word association of God/Art.

He's famous in America primarily for his '60s films which strongly influenced college students and rock musicians at the time. He collaborated with The Rolling Stones and recorded the original recording sessions of Sympathy for the Devil. This was a period of many radical films that were Genre Deconstructions of Film Noir, B-Movie, Science Fiction, The Musical and even a film about film-making like Contempt starring Brigitte Bardot and director Fritz Lang As Himself. The film Breathless pioneered the Jump Cut which was later adopted and overused by later directors and ironically in the kind of action films and music videos which were worlds away from the kind of films Godard made. He himself became involved in leftist political causes which made him unfashionable in the United States and controversial around the world, despite this he remains active to this day, still as untamed and unpredictable as ever.

The Academy gave him a Lifetime Achievement Award for his contributions in 2010, at a private ceremony that was not part of the main viewing. Godard refused to attend citing this, saying, "It's not the Oscars!" and partly because of his contempt for awards in general.

Godard also has a history of collaboration with his romantic partners. His first wife was the actress Anna Karina, who served as his muse during the sixties and acted in some of his most famous films. His second wife was the actress Anne Wiazemsky (who starred in Au Hasard Balthazar). He also had a relationship with filmmaker Anne-Marie Mieville, who collaborated with him behind the camera, co-writing several of his movies.

With the deaths of Jacques Rivette in 2016 and Agnès Varda in 2019, Godard became the last surviving director of the French New Wave.

Works by Jean-Luc Godard with their own trope pages: