Hostility on the Set 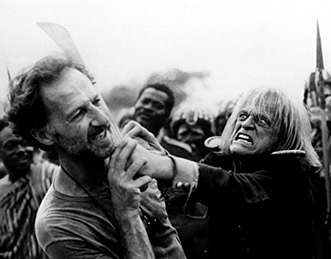 These guys made five films together. Unsurprisingly, this was the last one they made together.
"I'm fond of Captain Kirk, but I'm not terribly fond of Bill Shatner."
— James Doohan
Advertisement:

Generally, actors tend to get along well with their co-stars, and this tends to shine through on-screen. They may develop a Friendship on the Set that lasts beyond production, and a Romance on the Set may ensue in some cases.

This is not about those actors.

In some cases, some actors may be at each other's throats during filming or even a director with one or more actors. While this does not always show on the big screen, it can cause issues like a lack of chemistry between the actors. On the other hand, if the characters they are playing are antagonistic to each other, this can help add authenticity to their performances and increase their respect for each other.

This may occur due to, or even be the cause of a Troubled Production and/or Creative Differences. It can also be caused by a Creator Breakdown on the part of one or more actors, or the director. Often leads to Teeth-Clenched Teamwork and is a cornerstone of Horrible Hollywood. Compare Wag the Director, when the main stars create conflict with the director by running circles around them, and its polar opposite, the Prima Donna Director.

On a different note, consider that the audience has a much different perspective of making a movie than the cast and crew. Two people may be the best of friends in the regular world but constantly butt heads when in a stressful, professional setting like a movie set. As such, while there may be hostility that doesn't mean they actually hate and despise each other. There are many instances where in interviews people try drumming up that drama and they will be the first to defend their co-star.