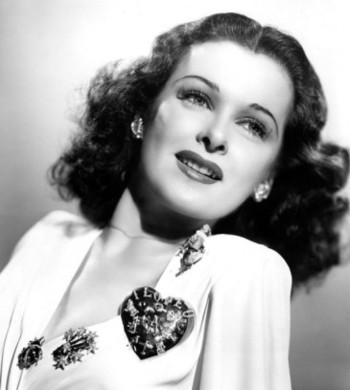 Joan Geraldine Bennett (February 27, 1910 – December 7, 1990) is an American actress who enjoyed a career that began in the silent era and ended in the '80s on television.

The daughter of actor Richard Bennett, Joan followed in the family trade, following the path of her elder sister Constance. One reason for her long career was her great skill for reinvention. In the late '20s and early '30s in the sound era, Bennett found fame as a comedy actress playing sassy blondes and ingenues. Her most notable film in this phase is Raoul Walsh's 1934 comedy Me and My Gal; for the role, Bennett dyed her hair brunette and this became her look for the rest of her life.

Bennett had a turbulent personal life, being married twice before her marriage with producer Walter Wanger. She appeared in many films produced by her husband, several of which were directed by major film-makers Fritz Lang, Jean Renoir and Max Ophuls. She made four films with Lang, included the famous Film Noir Scarlet Street, where she became one of the movies' most iconic Femmes Fatales. By the end of the '40s, she once again reinvented herself and began appearing in roles as a housewife, correctly believing that parts would dry up for a 40-year-old actress, though she did play a lead in The Reckless Moment as a committed housewife overworked by her ungrateful family in a melodrama/Film Noir hybrid. She also appeared opposite Spencer Tracy in Father of the Bride.

Bennett's career turned for the worse thanks to one of the most terrible Hollywood scandals. On December 13, 1951, she met her agent Jennings Lang in a car lot for a routine business meeting. The two of them were talking in her car when a strange man appeared and shot at Jennings Lang in the front seat. This man was her own husband Walter Wanger. Jennings Lang was horribly injured but the blow-up and lurid nature of the crime, and Wanger's subsequent trial tarnished Bennett by association. She was accused of having an affair with Jennings Lang and Wanger took revenge for being cuckolded. Wanger claimed temporary insanity at his trial, saying he underwent a nervous breakdown and suffered as a result of financial troubles over a series of commercial failures. The couple remained married until 1965, but for Bennett the damage was done. She appeared in only five films after the scandal and employment opportunities stalled for her. She began to appear in television, including Dark Shadows. Most notably she would make a comeback in The '70s and star in Dario Argento's Suspiria (1977) which became her final film.