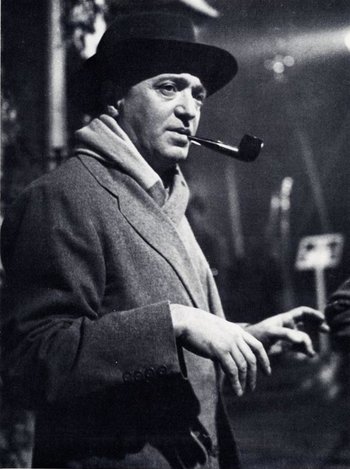 "I think I know the reason why
Producers tend to make him cry
They invariably demand
Some stationary set-ups, and
A shot that does not call for tracks
Is agony for poor old Max
Who, separated from his dolly,
Is wrapped in deepest melancholy.
Once, when they took away his crane,
I thought he’d never smile again."
— James Mason, poem composed for his director on the set of The Reckless Moment.
Advertisement:

Born Maximillian Oppenheimer (6 May 1902 – 26 March 1957) in Saarbrücken, Germany to a family of Jewish textile managers. He would take the name Max Ophüls as a theatrical nom-de-plume. He was active in Germany's theatrical district specializing in producing plays by Arthur Schnitzler, Goethe and other worthies of the German stage. He eventually found work in the Berlin Film Industry at UFA and came to fame with Liebelei (1933), an adaptation of a play by Schnitzler which includes many of Ophuls' famous camera tricks and gimmicks.

On account of his Jewish origin, Ophuls had to flee Germany alongside his family in 1933 when the Nazis came to power. He arrived in France, and for the remainder of The '30s he made films in France, with occasional forays into the film industry of Italy (La signora di tutti) and Holland (The Comedy of Gold), before coming to America in The '40s. His time in America was difficult on account of censorship and poor relationships with producers, most notably Howard Hughes who fired him from Vendetta leading to a famously Troubled Production. Ophuls got his revenge with his 1948 Film Noir Caught which was a Take That! about a Hughes-esque tycoon called Smith Ohlrig. His most famous film in the English language is Letter from an Unknown Woman starring Joan Fontaine, while the 1951 The Reckless Moment starring Joan Bennett is also considered a masterpiece.

Ophuls' famous style was already codified. His use of tracking shots, intricate camera movements choreographed and depicting complex movement of characters in spaces. His movies also featured women as protagonists and explored their viewpoint with sympathy and understanding greater than other film-makers of his time and place. Feeling stifled by Hollywood, Ophuls returned to France and ironically, it was his French films, and not his American films, that won him the great international fame that had eluded him for most of his peripatetic career. He made several films in France that were critically and commercially liked and moreover were influential internationally. He died in 1957 in the middle of a production of a Biopic about Amadeo Modigliani but he still amassed a reputation as one of the greatest film-makers in the world, loved by his contemporaries (Preston Sturges, Vincente Minnelli), the next generation (the French New Wave) and cited by Stanley Kubrick as his biggest influence. Indeed on hearing of his death, Kubrick, who was in the middle of making Paths of Glory, ordered a minute of silence on set, and also included many Shout Outs to Ophuls in his movies.

Max Ophuls' son Marcel Ophuls would become a notable film-maker in his own right as the director of documentaries such as The Sorrow and the Pity. One of Ophuls' nephews is cinematographer Michael Ballhaus who cited a childhood visit to the set of Lola Montes as inspiration for his career as director. Ballhaus would subsequently work with Rainer Werner Fassbinder and Martin Scorsese and continue the family tradition of intricate and acrobatic Tracking Shots and The Oner, extending the possibilities of cinema as a visual medium.