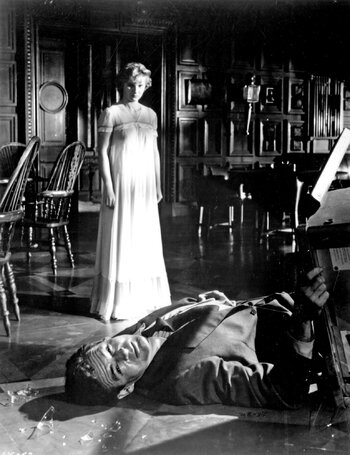 Asshole Victim vs. The Woobie
Advertisement:

Leonora Eames (Bel Geddes) is a young woman seeking security by marrying a rich man. She lands one with Smith Ohlig (Ryan), a millionaire industrialist. The only problem is that he can't and won't offer her love in return; Leonora is more his employee than his wife.

Finding this insupportable, Leonora leaves and becomes a receptionist for a Dr. Larry Quinada (Mason) on the Upper East Side in New York. The work is difficult, and she’s lured into Smith’s arms only to find that he’s up to his old tricks again. When she leaves again, she and Dr. Larry fall in love.

A surprise pregnancy brings her back to Smith, but his controlling ways begins to drive Leonora towards a mental breakdown.