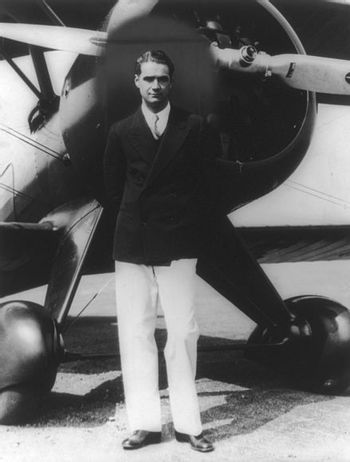 Hughes in front of his Boeing 100.
"Listen everybody,
let me tell you about dreams,
dreams are made
in a time of need,
get up in the mornin
and put on your shoes
and you can read about Howard Hughes"
— Lead Belly, "Howard Hughes"
Advertisement:

He is perhaps the most legendary tycoon of the 20th Century, simply for the drastic contrast between his public profile at the height of his fame in the '30s and '40s and the absolute recluse he became at the time of his death. Once known for his good looks and playboy reputation, along with an assortment of gorgeous movie star girlfriends, when his body was found, he was unrecognizable, his fingernails having grown enormously, his hair being uncut and his appearance haggard and shabby, his arms were filled with broken-off hypodermic needles. His body had to be identified by fingerprints. The circumstances of his death, the unusual levels of control he kept on his staff, and the revelations of his eccentricities and mental illnesses made Hughes a source of enduring fascination and Conspiracy Theory to this very day.

Hughes had two major careers, one in aviation and one in filmmaking. They overlapped briefly when he directed Hell's Angels, a World War I combat film with impressive footage of aerial combat. As an aviation pioneer in the 1930s, he set many records for flight times. But in the 1940s, he became notorious for his rather impractical plane designs on government contracts, many of them proving to be Awesome, but Impractical in terms of being unsafe and expensive to enter mass production. The famous Spruce Goose (a name which Hughes hated, preferring its official designation "H-4 Hercules")note He had a point in that the plane was made of birch was the definitive example. The Spruce Goose was commissioned to be made of non-strategic materials, intended to transport a mammoth number of troops and materiel across the Atlantic, safe from German submarines. It is the largest flying boat ever built and still boasts the longest wingspan of any plane. It also took so long to build that the war ended by the time it was complete, rendering its purpose meaningless. In the same period, Hughes also took a test-flight of another design, the XF-11 which crashed in Beverly Hills. Hughes barely survived the incident, and it is believed that the cocktail of drugs that he took in this time accelerated his mental breakdown. That his hearing had also severely damaged through other accidents, to the point where he was at least partially deaf and had great difficulties leading conversations with more than one person at the time, is also believed to have contributed.

As a filmmaker, Hughes' most important film was Howard Hawks' Scarface which he produced. His reputation after that is significantly more ambiguous. His 1943 Western The Outlaw caused a scandal for its lewd sexualization of actress Jane Russell, earning the disapproval of The Hays Code. Hughes was insistent that the camera focus on Russell's large chest and went the extra step to design a bra, using aviation design principles, to better accentuate her bust. (Russell later said that the bra was so uncomfortable that she couldn't wear it, so she just padded her own.) He also took over RKO Pictures in the '40s and during his time, he came into conflict with several filmmakers, Preston Sturges (who was briefly Hughes' friend), Max Ophuls, Josef von Sternberg among others. He also became a rabid anti-communist, producing the notorious The Woman on Pier 13, better known as I Married a Communist. His eccentric business practices became the stuff of Hollywood legend, including: meetings at 3:00 in the morning at a gas station several miles outside of Los Angeles, whimsical changes ordered to the editing of a film, and the constant hiring, firing, and rehiring of directors (the 1950 film Vendetta had four directors and Hughes later contributed some pick-ups, because why not). This later culminated in a bunch of tacky '50s spectacles that led to RKO, one of the most creative and enterprising of the Big 7 studios, to be reduced to a shell of its former self, described by one historian as a "systematic seven-year rape". The most notorious is The Conqueror starring John Wayne as Genghis Khan, in which Hughes' irresponsible production led to the film being made near a nuclear testing site in Nevada. Exposure on the set is believed to have caused the cancer-related deaths of many of the cast members.

This was also a period where Hughes started withdrawing from public life, returning briefly in the '70s, when a biography by Clifford Irving was denounced by Hughes as a hoax at a teleconference. Since his death, Hughes became a Historical Domain Character, the subject of many films and books. Likewise, most eccentric tycoons in comics and fiction are usually heavily based on Hughes: see Howard Hughes Homage.

Tropes associated with Hughes in Fiction and his own films