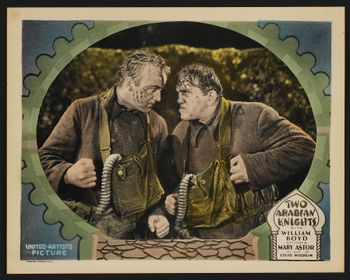 Two Arabian Knights is a 1927 comedy directed by Lewis Milestone and starring William Boyd (who would later go on to be famous for his portrayal of the cowboy Hopalong Cassidy) and Louis Wolheim). Boyd and Wolheim play American doughboys in World War I—respectively, W. Dangerfield Phelps III (a rich boy from Philadelphia) and Peter O'Gaffney (his sergeant, and a petty criminal in peacetime). Phelps and O'Gaffney dislike each other enough that they have a fistfight at the bottom of a foxhole in the middle of a battle. While punching each other they are captured by the Germans and taken to a POW camp.

Eventually Phelps and O'Gaffney make friends and escape from the POW camp. They are recaptured and (because they are wearing bathrobes from the showers to blend into the snow) placed in a column of Arab prisoners of war. They escape again, jumping from a moving train into a haycart, which promptly loads its hay onto a ship bound for Arabia. While on the ship, they meet an Arab princess, Mirza (Mary Astor). Mirza and Phelps fall in love, but she has already been pledged to marry an Arab prince.

Two Arabian Knights is the oldest surviving film produced by Howard Hughes. It was thought lost for many decades, until a print was found in Hughes' vaults after his death (unfortunately, the print is badly decayed in some scenes). None other than a young Boris Karloff has a small part as the purser on the Russian ship that takes Phelps and O'Gaffney to Arabia. This film won an Academy Award for "Best Director, Comedy Picture" for Lewis Milestone. This award was never given again, instead being fused with "Best Director, Dramatic Picture" to form a single Best Director award.