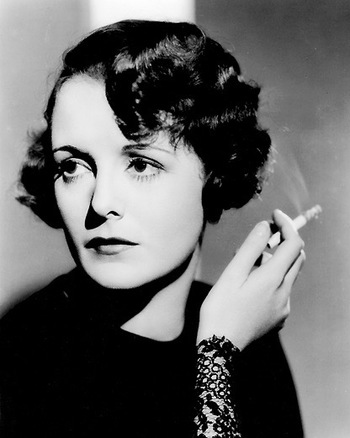 Mary Astor (born Lucile Vasconcellos Langhanke; May 3, 1906 – September 25, 1987) was an American actress active during The Golden Age of Hollywood. She is mostly remembered now for her role in the 1941 version of The Maltese Falcon; before then, however, she'd been appearing in movies since before they were made with sound.

Her first film was in a 1920 short film starring Buster Keaton (it turned out to be a Deleted Role). She continued making films throughout her teen years for the benefit of her parents, who took all the money she earned for their own lavish lifestyles, until she rebelled. (Many of these pictures are considered to be lost). She transitioned into talkies, being named as one of the WAMPAS Baby Stars (the Hollywood Hype Machine actresses) in 1926.

Astor was in a variety of roles in a variety of genres; although mostly an unknown actress nowadays, she appeared in a variety of movies with many famous actors that are still known today, such as Humphrey Bogart, Judy Garland, and Clark Gable. She hit the headlines in 1936 thanks to a messy child custody case

, during which her ex-husband (no slouch in the infidelity/bigamy department himself) threatened to reveal an alleged maneater reputation (in particular, an affair with the married playwright George S. Kaufman) that she had written about in her Secret Diary.note Keep in mind this was the days of The Hays Code, and morality clauses were written into actors' contracts. If immoral conduct of any kind were proved, it could end careers. (Look at what happened to Bergman

a decade later.) Mary, with her beloved little daughter to support, had to come out of this smelling like a rose. While said diary was never called to court because the judge demanded the whole book, not just torn-out pages or excerpts, New York Daily News Intrepid Reporter Florabel Muir

got hold of it and her photocopies were published. It didn't damage Astor's career, however — she managed to win an Academy Award for The Great Lie in 1941.

Due to her alcoholism, Astor was recommended in rehab to write an autobiography by a priest/psychologist. The book became a bestseller in 1959. She later moved to New York, appeared on Broadway and acted on TV. She also became an author, writing another autobiography as well as fiction. She retired from acting in the 1960s and died from respiratory failure at 81 years old.