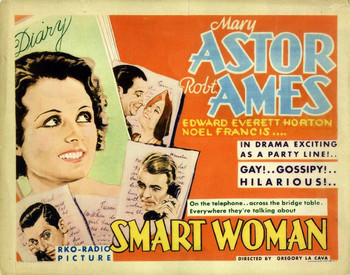 Smart Woman is a 1931 comedy directed by Gregory La Cava.

Nancy Gibson (Mary Astor) is a young bride coming back to America after an extended stay in Paris looking after her sick mother. Sir Guy Harrington, another first-class passenger on the boat, hits on her, but Mary is in love with her husband Donald and would never even dream of having a fling.

Robert Ames, who played Donald, died of alcoholism just two months after this film was released.