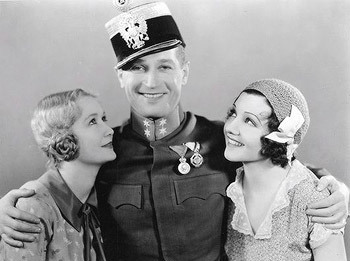 Chevalier is Lieutenant Nikolaus "Niki" von Preyn, a carefree Austrian officer who enjoys romancing the ladies and has recently entered into a romance with Franzi (Colbert), a charming violin player. One day, when standing as an honor guard for the visiting King of Flausenthurm and his daughter Princess Anna (Hopkins), Niki winks at his girlfriend across the street—but at that moment the royal coach passes, and Princess Anna thinks the smile and wink were for her. She quickly takes a fancy to the handsome officer, and Niki finds himself being roped into a marriage—but he hasn't forgotten Franzi.

This is a notable example of a film from The Pre-Code Era, which included much more risque humor and double entendres than films would be able to use after The Hays Code was strictly enforced a few years later.