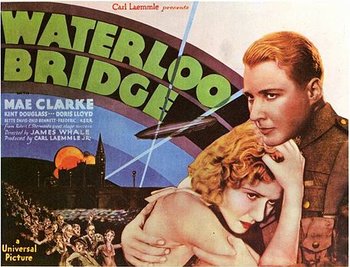 London, 1917: chorus-girl turned prostitute, Myra Deauville (Mae Clarke) is meeting potential clients on the titular bridge. One night she meets kindhearted Roy Cronin (Douglass Montgomery), who’s a young and naïve soldier looking for company. He falls in love with her unaware of what she does for a living. Myra is reluctant about this relationship; her situation as a prostitute is a shameful necessity, and she doesn't want Roy to find out about it especially when he wants his family to meet her. Eventually, he tricks her to going out in the country to visit his parents, and she spills her secret to his mother. Instead of being repulsed, Mary Cronin is compassionate and understanding. Unable to cope, Myra runs away and tries to forget Roy.

The film is based on the play of the same name written by Robert E. Sherwood. The producer, Carl Laemmle, was so impressed with how James Whale worked under budget, he gave him more work. Whale’s next feature was Universal's beloved monster flick, Frankenstein. Also, Waterloo Bridge includes an early-bird appearance of Bette Davis as Roy’s sister, Janet Cronin.

Waterloo Bridge was remade in 1940 with Vivien Leigh and Robert Taylor, as Myra and Roy respectively, and again in 1956 as Gaby, with Leslie Caron and John Kerr as the leads (now named Gaby and Gregory). The 1940 version doesn't involve prostitution due to censorship, and it adds major changes to the story. In the same vein, Gaby eschews the Downer Ending for a more palatable resolution.