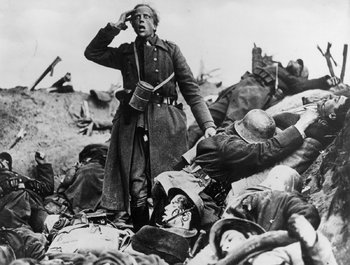 Westfront 1918 is a 1930 German war film directed by Georg Wilhelm Pabst. It was adapted from the novel Vier von der Infanterie (Four of the Infantry) by Ernst Johannsen, who was a veteran of the battle of Verdun.

Set mostly in the trenches of the Western Front towards the end of World War I, the film deals with the impact of the war on a group of four German infantrymen: a jovial fellow from Bavaria, a student who has fallen in love with a French girl, the company's lieutenant, and Karl, the only one named, who has a wife waiting for him back home.

The film was one of the first European talkies and featured an ensemble cast led by screen veterans Fritz Kampers and Gustav Diessl.