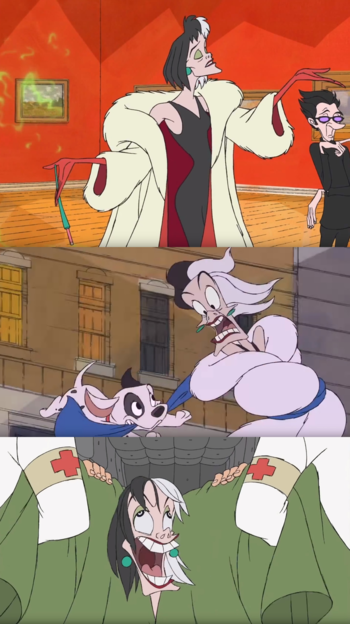 Never Work with Children or Animals. Or animals that are children.
"Madness is the emergency exit. You can just step outside, and close the door on all those dreadful things that happened. You can lock them away forever."
— The Joker, The Killing Joke
Advertisement:

A sister trope to Go Mad from the Revelation, Driven to Madness represents a deliberate attack upon a character's sanity and mental stability.

There are many varied reasons for someone to attempt to drive another person to madness. Perhaps they seek to break the character's will in order to make them more pliable, or it may be an attempt to induce a Freak Out or Face–Heel Turn. They may wish to punish the character or torment them by attacking their loved ones in such a fashion. They may try doing so in order to have someone discredited or declared incompetent. Maybe they're just jerks.

Somewhat less evilly, someone may regard sanity as a prison and seek to release a character from its constraints by any means necessary.

The methods can vary, as well, from making them doubt their perceptions, to the aforementioned torture, exposure to a Brown Note, or even straight-up Mind Rape. Some Eldritch Abominations drive men mad with their mere presence. Sometimes it can come just from going really really fast.

Particularly effective if the character has reason to doubt their own sanity, such as if they have recently been discharged from a mental institution or have undergone a nervous breakdown. Indeed, in such a situation, this often takes the form of a Through the Eyes of Madness plot - at least at first.

May be an aspect of the Mind Game Ship if the reasons for the sanity breaking are part of the appeal.

Can overlap with Break the Cutie.

The subtrope, Gaslighting, is the subtle, insidious form of this.