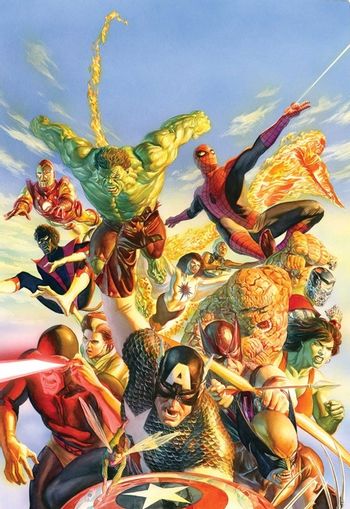 Can the combined forces of Earth's most powerful super heroes defeat the ultimate menace?!!
"I am from beyond! Slay your enemies and all you desire shall be yours! Nothing you dream of is impossible for me to accomplish!"
— The Beyonder
Advertisement:

Secret Wars is a twelve-issue comic book Crisis Crossover limited series published from May 1984 to April 1985 by Marvel Comics, written by Jim Shooter (also the Editor-In-Chief of Marvel at the time), and pencilled by Mike Zeck, with Bob Layton doing fill-in work on some issues.

A nearly omnipotent Cosmic Entity by the name of The Beyonder, fascinated by the presence of superheroes on Earth and their potential, chooses groups of both heroes and supervillains (and Galactus) and teleports them against their will to "Battleworld", a planet created by him in a distant galaxy, stocked with alien weapons, technology and mismatched parts from different worlds. He tells them to kill each other, and, to the victor, his greatest desire will be granted. His purpose is to understand the (to him) alien concept of "desire".

The heroes include the Fantastic Four (minus Sue Storm, who was pregnant at the time), The Mighty Thor, the Jim Rhodes version of Iron Man, the Monica Rambeau version of Captain Marvel, She-Hulk, Spider-Man, Hulk, Hawkeye, Captain America and The Wasp, with the second Spider-Woman (Julia Carpenter) showing up several issues in (in her first appearance). Members of the X-Men (Professor X, Storm, Colossus, Wolverine, Nightcrawler, Rogue, and Lockheed the Dragon, plus Cyclops who technically wasn't an X-Man at the moment) split off from the main heroic team and act as a separate faction for much of the book. Magneto, buffing up his Anti-Villain credentials, also does his own thing before joining with his fellow mutants. Villains include Doctor Doom, Doctor Octopus, Klaw, Ultron, the Lizard, the Wrecking Crew, the Enchantress, Kang the Conqueror, Molecule Man, the Absorbing Man, and the new villains Titania and Volcana. The heroes spend most of their time trying to understand their situation and fixing it, while Doom plots his own agenda, because of course he does.

Originally envisioned to promote a new line of action figures, the series features a huge war between the greatest heroes and villains of the Marvel Universe. And Bulldozer. It ultimately sparked a series of status-quo shifts across all titles whose impact continues to reverberate to the present day. Spidey gets a shiny new black costume inspired by Spider-Woman's (which would later become the Venom symbiote), She-Hulk briefly replaced The Thing in the Fantastic Four (who stays behind after he finds he can revert to human form on the Battleworld), Volcana hooks up with Molecule Man, and Colossus gets Strangled by the Red String to an alien healer, causing him to break up with Kitty Pryde.

Over the years there have been a number of follow-ups to Secret Wars:

Not to be confused with the miniseries in the 2000s titled Secret War (singular) but it had nothing to do with the first two. Instead, it was about superspy Nick Fury getting some heroes to help him track the source of supervillain technology (which turned out to be the Latverian head of state, Lucia Von Bardas), and ended with Fury being removed as leader of S.H.I.E.L.D. for acting without permission. Notably, this was one of the stories that helped kick off the Civil War.

Directors Joe & Anthony Russo, along writers Christopher Markus & Stephen McFeely — who worked on Captain America: The Winter Soldier, Captain America: Civil War, Avengers: Infinity War, and Avengers: Endgame — have indicated that they are interested in eventually making a Live-Action Adaptation as part of the Marvel Cinematic Universe, although such an adaptation would come a long time after the release of Endgame.