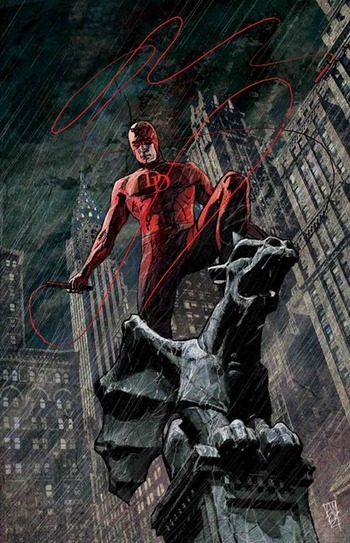 The Man Without Fear.
"Few of us who choose this life are immune to tragedy or pain. Matt Murdock has suffered more of his share than most, but he keeps soldiering on, doing what he believes is right. The fact he has been able to take what most people call a ‘disability’ and turn it into his greatest strength, the fact a blind man takes to the streets every night to defend strangers, at huge personal cost—
Well. I know people look up to me.
I look up to Daredevil."
— Captain America, Marvel XP dossier on Daredevil

The Man Without Fear. The Devil of Hell's Kitchen. The Disability Superpower Hero.

Daredevil is a Marvel Comics Superhero created by Stan Lee and Bill Everett, with artistic input from Jack Kirby and Wally Wood. Daredevil was an attempt to recreate Lee's earlier success with the archetypal "everyman" hero Spider-Man, this time with an adult central character and a somewhat Darker and Edgier tone. The new character first appeared in "Daredevil" #1 (April, 1964)

Daredevil has the ultimate in Disability Superpower — he is blind, but his other senses are superhumanly sharp. This is the result of his having been blinded by a radioactive substance whilst rescuing a blind man (oh, the irony) from the path of an oncoming trucknote reportedly, that same ooze also had an even more dramatic effect on some baby turtles. He is also a superb gymnast and martial artist, having been trained from an early age by a mysterious blind sensei called Stick. Stick also showed him how to control his senses in order to live normally. His Secret Identity is that of Matt Murdock, attorney-at-law.

Despite his book having been home to some of the most respected writers (Stan Lee, Frank Miller, Ann Nocenti, Kevin Smith, Brian Michael Bendis, Ed Brubaker, and Mark Waid) and artists (Klaus Janson, John Romita Jr, Alex Maleev, Bill Sienkiewicz and David Mazzucchelli) in the business, Daredevil has never really succeeded in making the breakthrough into mainstream popular culture in the way that stablemates such as Spider-Man and the X-Men have, and he was generally considered to be at best a C-list character until Frank Miller took over the title in 1981 and introduced what are now considered to be some of the defining elements of the Daredevil mythos, including the characters of The Kingpin (originally a Spider-Man villain), Bullseye, and Elektra.

Part of the reason for the character's relative lack of popularity may lie in the fact that, Bullseye, Elektra, The Hand, and The Kingpin (and possibly Mr. Fear and Mr. Hyde) aside, he has been lumbered with arguably the least impressive Rogues Gallery in comics, including such threats as Shotgun (a guy with a gun), Ammo (a guy with lots of guns), The Jester (a failed actor with some toys and yo-yos for weaponsnote although he sounds like The Joker knockoff, his actual character is surprisingly different: The Jester's not even insane, he just has a gigantic ego), The Owl (a gang boss who can fly — v-e-r-y s-l-o-w-l-y), the Matador (whose entire gimmick revolves around making you unable to see him note keep in mind that Daredevil is blind and his other senses are extremely sharp, making invisibility useless against him), Leap-Frog (who is a man in a frog suit who is able to jump very high), and Stilt-Man (who unfortunately is just what he sounds like). Luckily, in later years the writers have been working to remedy this (see Echo, Purple Man, Bushwhacker, Gladiator, Bullet, Nuke and Typhoid Mary). Keep in mind that some of these villains were merely Rescued from the Scrappy Heap. Purple Man, Bullseye and Gladiator were created before Frank Miller took over the title but subsequently managed to become much more threatening in later years. Even Owl is now one of Daredevil's most dangerous rogues thanks to him being given an extra dose of Nightmare Fuel, while Mark Waid has actually made Jester a relevant antagonist with his current take on the character.

A Daredevil film was released in 2003, starring Ben Affleck and Jennifer Garner, but despite being one of the most faithful comic-to-screen adaptations ever made — it lifted whole scenes and even entire chunks of dialogue from Miller's run — and some strong casting, it was a critical failure, in no small part due to being a vehicle for nu-metal and having severe Executive Meddling done to it; the director's cut is far better received. Some people prefer to believe that it never happened, though many liked Colin Farrell as Bullseye and Michael Clarke Duncan as Kingpin. Despite it making back more than double its budget at the box office, they did not do a direct sequel, but a spin-off starring Garner as Elektra. It didn't go over well. On a lighter note, Garner and Affleck (who met on the first film) later married in real life, have had three children, though in June of 2015 they announced that they were divorcing. As for the film property's future, the rights have reverted to Marvel.

In 2015 Marvel released Daredevil (2015) exclusive to Netflix, as part of a multi-series deal including Luke Cage (2016), Iron Fist (2017), and Jessica Jones (2015). The series is part of the Marvel Cinematic Universe and stars Charlie Cox as Matt Murdock. So far it has garnered rave reviews, with many considering it to be among the best, if not the best, works in the MCU. The series was canceled after three seasons, as a result of Disney creating Disney+ as a competitor to Netflix, and the future of the character in the franchise is still unknown.

Daredevil has also made the occasional animated appearance, with guest appearances in the 1990s Fantastic Four and Spider-Man: The Animated Series (the former leans more closely to his Silver Age appearance, while the latter show took after the Miller version). Several animated series have been proposed over the years, but never came to fruition.

The character was also one of two characters created by Stan Lee to have never been an Avenger, until he was added to the New Avengers line-up in 2011.

After a long stretch of very dark stories, Mark Waid's lighter take —spanning two volumes between 2011 and 2015— was well-received by critics and audiences alike. Charles Soule took over the title with a new volume in late 2015 during the All-New, All-Different Marvel initiative — perhaps due to the success of the Netflix series, his run seems to be Darker and Edgier in contrast to Waid's, even giving him a new black costume similar to the one he wears on the show. Soule's run has its own page. In 2019, Chip Zdarsky took over. His run also has its own page.