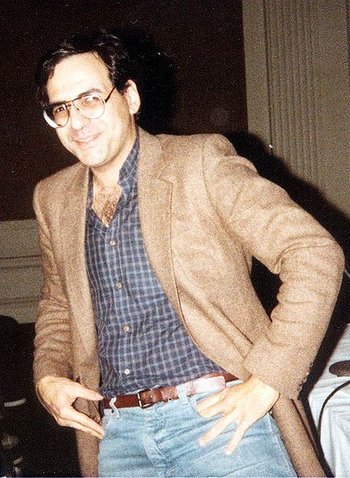 Steve Gerber (1947-2008) was a comic book writer known for Genre-Busting and championing creator's rights. Writing in The '70s, he prefigured the Darker and Grittier Eighties, writing genre-stretching stories about small characters with less-than-supernatural problems. Before Alan Moore's notable run on Swamp Thing, Gerber was writing Man-Thing, redefining the character and moving from Sword and Sorcery to Sci-Fi to Horror stories in as many issues. Before Dave Sim's Cerebus the Aardvark, there was Gerber's Howard the Duck, a Deadpan Snarker cartoon character thrust into a world of real people and real problems.

When Gerber left Marvel Comics over concerns about creator's rights (his Omega the Unknown having been taken from him, canceled, then summarily killed off by another writer), he fought for control of Howard. The legal costs drove him to bankruptcy, and he started the creator-controlled comic Destroyer Duck to try to alleviate the costs of the case. Gerber was joined by notable industry friends like Jack Kirby, who worked pro bono.

He never regained the rights to his characters and spent years in seclusion from comics working in television on The Transformers, G.I. Joe: A Real American Hero, Dungeons & Dragons (1983), and Thundarr the Barbarian, which he created. He also co-wrote a single episode of Star Trek: The Next Generation, "Contagion". Though he never won his fight with The Industry, he helped blaze a trail for future writers to fight for their intellectual property, like Eastman and Laird (and the other guys behind the Comic Book Legal Defense Fund) and even creator-owned companies companies like Image Comics. He also inspired authors not to shy away from difficult material, whatever their chosen medium. Neil Gaiman has cited Man-Thing as an influence for his own genre-stretching Sandman series.

Gerber was inducted posthumously into the Eisner Award Hall of Fame.

Gerber contributed to the following works:

His work presents examples of the following tropes: