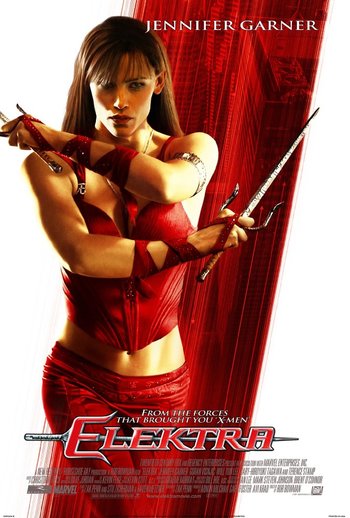 She's the last thing that stands between good and evil.
"Her name was Elektra. She was a warrior. She was also dead. Well, nobody's perfect. Only a warrior can come back from death and even then the second life is never quite like the first."
— Stick, Trailer narration
Advertisement:

Elektra is a 2005 spinoff of the Daredevil film starring Jennifer Garner as Elektra. After being killed in Daredevil, Elektra Natchios is revived by a blind martial arts master called Stick (Terence Stamp). She is brought to his training compound, but is soon expelled because of her inability to let go of her rage and fear from seeing her mother's killer as a child. She leaves and uses her training to become a contract killer, but becomes reluctant to carry out a hit on Mark (Goran Višnjić) and Abby Miller (Kirsten Prout). In helping them escape, Elektra learns that Mark and Abby are not as normal as they appear to be. As she faces off against The Hand, an organization that seeks to capture Abby because she is the sacred "Treasure," Elektra soon learns that Kirigi (Will Yun Lee), a member and top assassin of The Hand leading a group of powerful followers, was sent to kill her mother when Elektra was only a child.