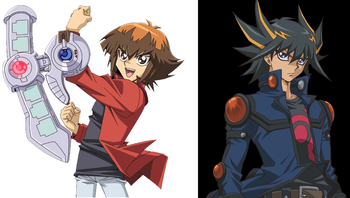 Making a sequel is hard. One needs to find the perfect balance of new stuff to contrast with the original. One way to get some difference is to take your old protagonist and make his mirror image, but with contrasting traits. Was the previous hero a Hot-Blooded Action Hero? Make the new one a Action Survivor who relies on brains over brawn. Was he a young Wide-Eyed Idealist? Make the other an older Knight in Sour Armor. Was he a man? Have the new one be a woman.

The new protagonist will sometimes have an Establishing Character Moment just to drive the point home that they’re nothing like the previous one.

The trope can also potentially lead to some interesting moments should the two ever meet. That is unless they already knew each other from the beginning. But even then, they’ll have moments of establishing each other as Foils to one another. Such characters may share some more basic traits, like heroism, allowing someone to note how they aren't so different. Beware, however, as they can easily end up becoming a Replacement Scrappy.

Subtrope of Breaking Old Trends. May overlap with Anti-Hero Substitute.