Visual Novel / Heaven Will Be Mine 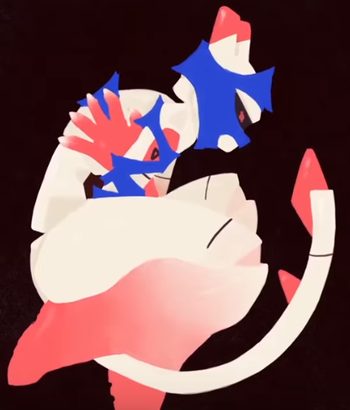 The Stolen Ship-Self Interloper Prototype String of Pearls
Win for your ideals or lose for love, and grasp heaven in your hands.

Heaven Will Be Mine is the Non-Linear Sequel to We Know the Devil, from the same creators — writer Aevee Bee, artist Mia Schwartz, and musician Alec Lambert — under their new label of Pillow Fight Games.

Heaven Will Be Mine is a queer science fiction mecha visual novel about joyriding mecha, kissing your enemies, and fighting gravity’s pull. It follows three women — veteran ace Luna-Terra, overwhelming super psychic Pluto, and hacker-hijacker Saturn — as they fight for three different factions — the military Memorial Foundation, the idealist space nation Cradle's Graces, and the megacorporation Celestial Mechanics — in an eight day war, piloting giant robots in the last days of an alternate 1980s space program, fighting for humanity’s future—or ditching their jobs to make out with each other instead.

Unlike the unique two and three mechanic of We Know the Devil, Heaven Will Be Mine uses a more conventional system of character selection with branching choices that favor the three factions and their goals for the future of humanity.

. The launch trailer can be seen here

Heaven Will Be Mine contains examples of: